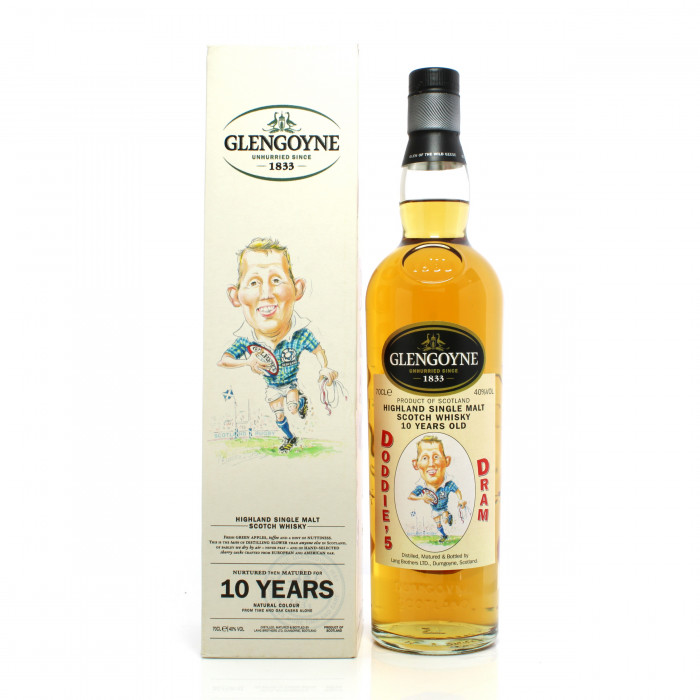 This isn’t just any Glengoyne 10 Year Old; this limited-edition features an illustration of Doddie on the bottle label and has been aptly-named ‘Doddie’s Dram’.

This release was the result of a collaboration between former Scottish rugby player Finlay Calder and Ian Macleod’s Gordon Doctor in coming up with a special release bottling for the My Name’5 Doddie Foundation. The packaging was also kindly donated, and 600 bottles were created for use by the Foundation to sell, auction off and use at prizes at events.

As for the liquid itself, this 10-year-old is a Highland single malt from Glengoyne Distillery, which has one of the slowest distillations in Scotland. Matured for ten years in hand-selected American and European oak sherry casks, this expression is bottled at a strength of 40% abv.

Aromas are light and fresh with cut grass, creamy vanilla and floral aspects. The palate is rich in barley and green apples with toffee popcorn and brazil nuts, with the finish then turning soft and sweet with a touch of liquorice and oak.

What could be better than your favourite dram in a bespoke bottling? Doddie fans, you don’t want to let this one slip away!