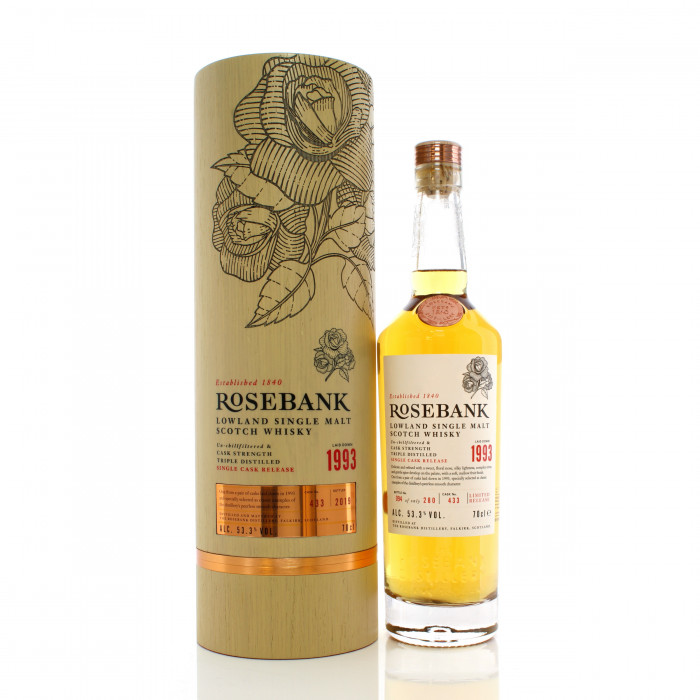 Rosebank Distillery excited whisky enthusiasts worldwide by announcing the release of two limited edition, single cask whiskies. These exceptionally rare casks were specially chosen as they were distilled in 1993, the year of the distillery’s closure and the last time the inimitable spirit ran through the original stills. Only 100 bottles of each release have been made available via ballot making this exceptionally rare and highly sought after.

Marked as 'Release One' this is the first in a series of bottlings which will lead up to the new spirit being released from the newly-designed distillery. Only 100 bottles of whisky from each will initially be released and available to purchase via ballot, making these releases - the first official bottlings from the distillery since it was acquired by Ian Macleod Distillers – rarer still.

Cask Number 433, with a natural cask strength of 53.3% and output of 280 bottles, is delicate and refined on the nose - with hints of vanilla, mango, raspberry, barley sugar and lavender. Silky and light on the tongue, it gives way to complex flavours of cranachan and lemon, with gentle floral notes, marzipan and faint spice completing the profile. It has a soft, satisfying citrus finish with hints of ripe fruit and oak.

Fun fact: Doddie was just 30 years old when he played his 61st and final match for Scotland on 4th March 2000, where he played against France on Murrayfield in the Six Nations.

This bottle has been personally donated by Leonard Russell of Ian MacLeod Distillers.