Combining spirit aged in French oak casks alongside classic Ardbeg aged within ex-bourbon American oak casks, we are given a bottling that is as mysterious as the natural phenomena of which it gains its name.

To the North of Islay, in a part of the sea known as The Gulf of Corryvreckan, lies a ferocious whirlpool. Described by the Royal Navy itself as “unnavigable”, this powerful maelstrom feared by many a sailor, has firmly cemented itself within the areas folklore. Its unpredictable, unmerciful swirling current is the inspiration behind Ardbeg’s aptly named Corryvreckan. 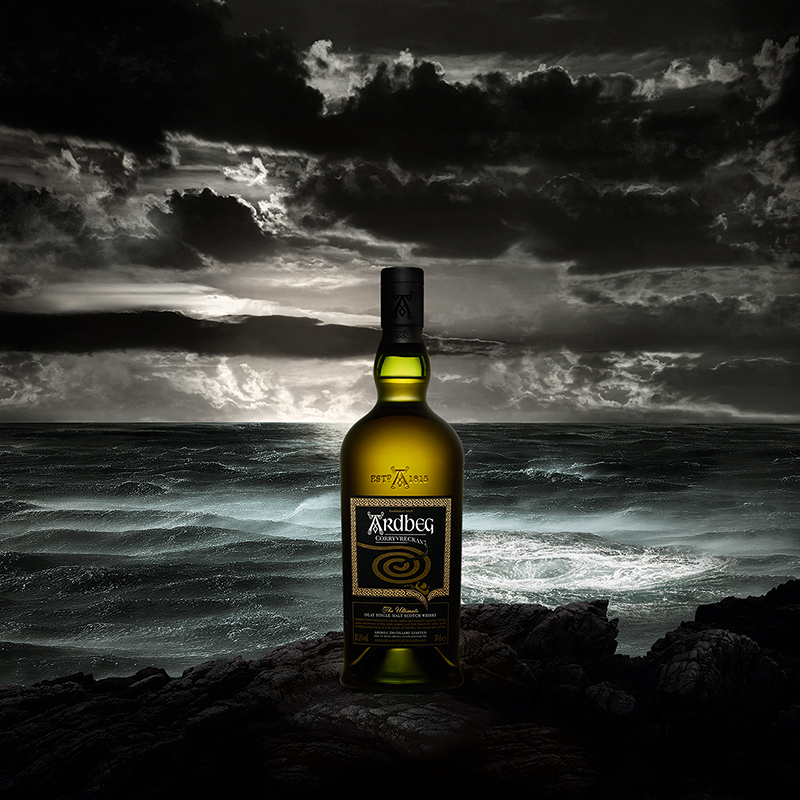 Much like the natural force of the Corryvreckan, Ardbeg’s Corryvreckan is not a single malt for the faint of heart. The bottle itself is beautiful; classic Ardbeg green, simple yet intimidatingly bold. The label carries forth this confidence visualising the swirl of the Corryvreckan, decorated with gold Celtic design. There is a real sense of occasion to the bottle; I imagine pulling this bottle out of the cabinet when I am in the finest of company; a secret weapon, guaranteed to widen some eyes and spark some conversation.

So with my glass in hand and my sense of adventure ever increasing, I pour myself a generous dram and I set sail towards this infamous vortex. In the pit of my stomach a mixture of excitement and nervous anticipation grow; will the rumours be true?

On the nose the Corryvreckan makes its first impression, bold and intense. Strong aromas of smoky peat swell surrounded by an invigorating salty sea air and the presence of freshly tarred wood. Swirling the glass unleashes more of the maelstrom’s character. Dark fruits and dark chocolate show a sweeter side to this beast, but don’t be fooled; a fierce peppery wave reminds you to keep your wits about you.

On the palate the storm rages on, again those peppery waves crash and swirl filling your mouth with an intense taste. Bubbling and boiling, simmering and frothing the tastes deepen; coffee, dark fruits and rich spice crash and roll.

There is no calm after this storm, the finish remains powerful and linger; dark chocolate, rich fruits and warming pepper remind you of the heroic journey you have made through the Corryvreckan.