Benromach Distillery was founded in 1898 on Alexander Edward's Sanquhar Estate near Forres but did not go into production until 1909. The reason for the delay is interesting. 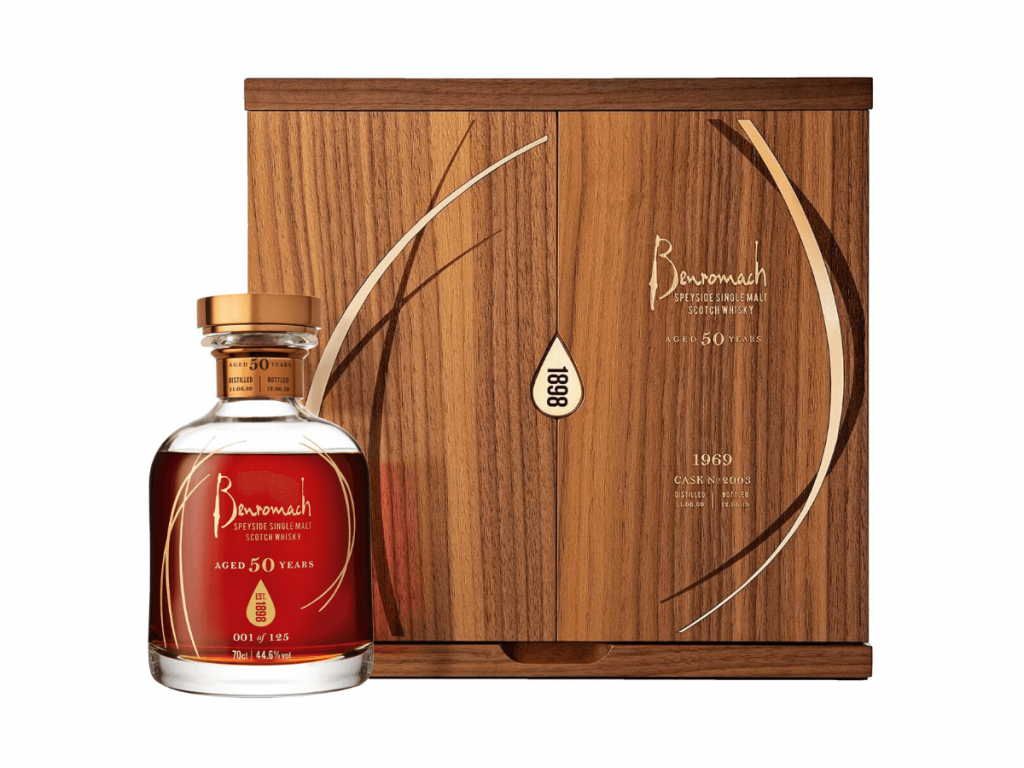 The Benromach 50 year old is rich amber in hue although drawn from an American oak cask. Mellow and highly fragrant, with top notes of tropical fruit (mango, papaya, banana), backed by natural turpentine on a base of sandalwood. Exotic. The texture is smooth and the taste sweet, with a dry and lingering aftertaste of scented wood.

The founders were Duncan McCallum (owner of Glen Nevis Distillery, Campbeltown) and F.W. Brickmann (spirits broker in Leith), supported by Alexander Edward; entrepreneur philanthropist, owner of the first motor car in Morayshire and one of the unsung heroes of the Scotch whisky industry in the 1890's.

Edward was born near Craigellachie and in 1888 founded the Craigellachie Distillery Company, in partnership with Peter Mackie and others, when he was only 23. The company built the distillery there in 1891, to supply fillings for White Horse, which Mackie launched the same year.

In 1893 Edward inherited Benrinnes Distillery from his father and rebuilt it; in 1894 he bought the brick and tile works in Craigellachie, and in 1895 built Aultmore Distillery. By 1896 he had also built the Craigellachie Hotel and much of the village.

The Banffshire Herald of 31st January that year reported:

Mr Edward's success in having amassed an independent fortune before he was barely entered in his 30's is regarded as a perfect marvel. He is not contented to make his pile by the thousand, but by his potent tact and skill can accomplish this by tens of thousands... Mr Edward is endowed with a most warm and generous hear, showing constant kindness and attention to those under him...

He went on to buy Oban Distillery in 1898, the same year as he supported the Benromach Distillery venture. Alas, two of his principal customers for malt fillings were the blenders, Pattison of Leith and the aforementioned F.W. Brickmann. The Pattison brothers were also part-owners of Oban and Aultmore (and half owners of Glenfarclas), while Brickmann sat on the board of Benrinnes and Benromach. At the time, Pattison of Leith was one of the largest and best-known blenders in Scotland.

But in December 1898, rumours began to circulate about Pattison's liquidity and the Clydesdale Bank refused to honour the company's cheques. Its conspicuous success and the lavish lifestyle of its owners were based on borrowed money, credit within the whisky industry and worse: the brothers were found guilty of 'fraudulent flotation, other frauds and embezzlement' in 1901 and sent to prison.

The collapse not only destroyed confidence in the Scotch whisky industry, it ruined at least nine other companies, including that of F.W. Brickmann. The construction of Benromach was put on hold and, even after completion, it had a chequered career until it was bought in 1993 by Gordon and MacPhail, the long-established family-owned wine & spirits merchants in Elgin. They spent the next five years reinstating the plant, all of which had been removed by the previous owner, Scottish Malt Distilleries, who had themselves refurbished Benromach in 1966. This splendid example of the make this dates from that period.