By the end of 1995, Windows 95 had launched and revolutionised home computing, the internet had entered the public consciousness with America Online offering access to the World Wide Web for the first time, eBay founded the first online auction site, and the DVD was invented by Philips, SONY, Toshiba and Panasonic. With the new millennium on the horizon, it was a year for innovation.

The whisky industry was also exploring novel approaches to its centuries old craft, with Glenmorangie releasing the world’s first single malt extra-matured in Madeira casks. The much-loved expression was a great success and is still sought-after to this day. Dr Bill Lumsden, Head of Distilling and Whisky Creation at Glenmorangie, has long held a burning ambition to revisit the finishing method, but finding casks of the highest standard proved to be a challenge.

Eventually the decision was taken to create bespoke casks, purpose-built for a new Madeira finished Glenmorangie expression. The new high-spec casks were seasoned with Malmsey, a type of fortified wine widely recognised as the richest, sweetest style of Madeira wine, with upward of four percent residual sugar content. The casks then baked under the sun while the wine within sweetened, imparting its influence on the wood in the process.

Years later, the casks were finally shipped to Scotland, finding a home at the Glenmorangie distillery warehouses, where new make spirit is placed in ex-bourbon casks for a minimum of three years and one day before it can be pronounced whisky. Some time after, a number of casks were selected to have their contents transferred to the bespoke Malmsey casks for a period of extra-maturation until Dr Bill Lumsden found the characteristics he had been longing to create.

Aptly named Glenmorangie Bacalta - meaning baked according to my Dwelly’s Illustrated Gaelic Dictionary Vol. 1 (1918) - this expression is the eighth release in the Private Edition collection that has brought us such prized whiskies as Milsean, Tùsail and Ealanta. Presented non chill-filtered at a strength of 46% abv, the nose is sweet and fragrant with honey, ripe apricots and white chocolate. The palate bursts with mint toffee and baked fruits before lots of honeycomb, almonds and dates. The rich and syrupy finish brings more caramelised citrus with some creamy fudge and an intriguing eucalyptus sensation. 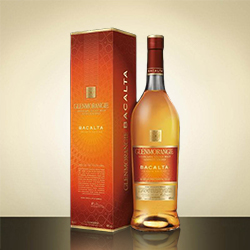