One thing is certain about Laphroaig single malt: no drinker is indifferent to it. Some love its unapologetically full-on peaty, medicinal charms, while others are bewildered by its appeal. Indeed, Laphroaig has been compared to Marmite for the extreme reactions it provokes. “Love it or hate it, but never ignore,” as the distillery Twitter feeds declares. 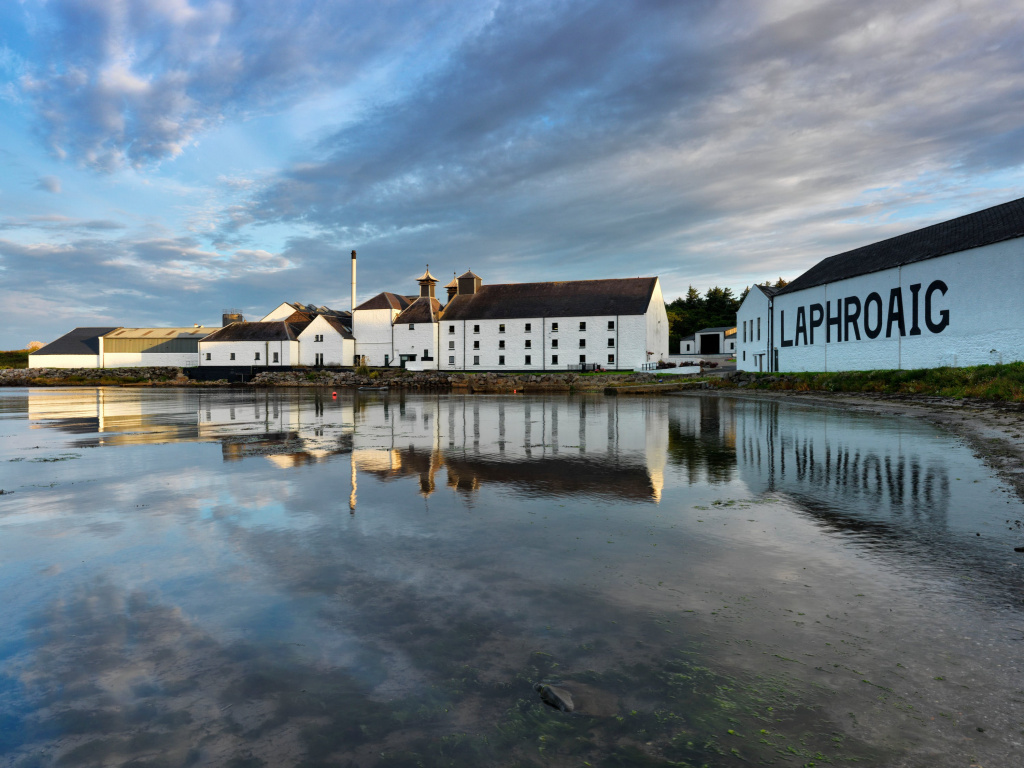 Laphroaig has been likened to a burning hospital, and was sold in America during Prohibition for medical purposes, due to the Surgeon General’s refusal to believe that it could be drunk for pleasure!

But the ‘lovers’ of Laphroaig are many, making it the world’s best-selling peated whisky, the sixth-best-selling single malt whisky globally, and the number three single malt in the UK. High profile aficionados of its distinctive style include HRH The Prince of Wales, who bestowed his Royal Warrant on the distillery in 1994. 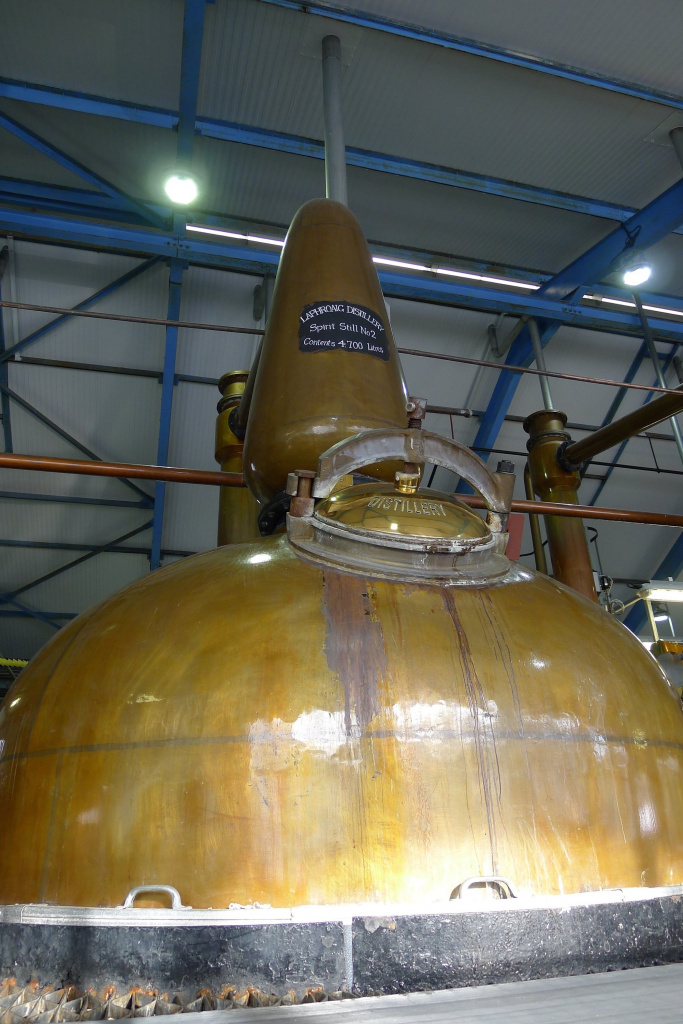 Laphroaig is situated on the southern shores of the Hebridean island of Islay, just a mile and a half east of the ferry port of Port Ellen, and close to Lagavulin and Ardbeg distilleries. Laphroaig – which takes its name from the Gaelic for ‘beautiful hollow by the broad bay’ – was first licensed in 1815 to brothers Alexander and Donald Johnston, though it is thought that the Johnstons may have been distilling illicitly at Laphroaig for several years prior to obtaining a licence.

Laphroaig continued to be operated by the Johnston family until the death of Ian Hunter – the last family member to be involved – in 1954. Hunter was succeeded at the Laphroaig helm by Elizabeth ‘Bessie’ Williamson, who had worked as Ian Hunter’s personal assistant and became one of the very few women at that time to have a distillery role that extended beyond typing and tea-making.

Bessie Williamson ran Laphroaig until retiring in 1972, though during the previous decade ownership of the distillery had passed to Seager Evans & Company. The brewer Whitbread & Co. Ltd. bought Seager Evans in 1975, and in 1989 Allied Distillers Ltd took over Whitbread’s spirits division. When the Allied empire was split up in 2005, Laphroaig was purchased by Fortune Brands, and operated by its Beam Global Spirits & Wine subsidiary. However, 2014 saw a merger between Beam and Japanese distilling giant Suntory, which brought Laphroaig into the same ownership as its Islay single malt rival, Bowmore. 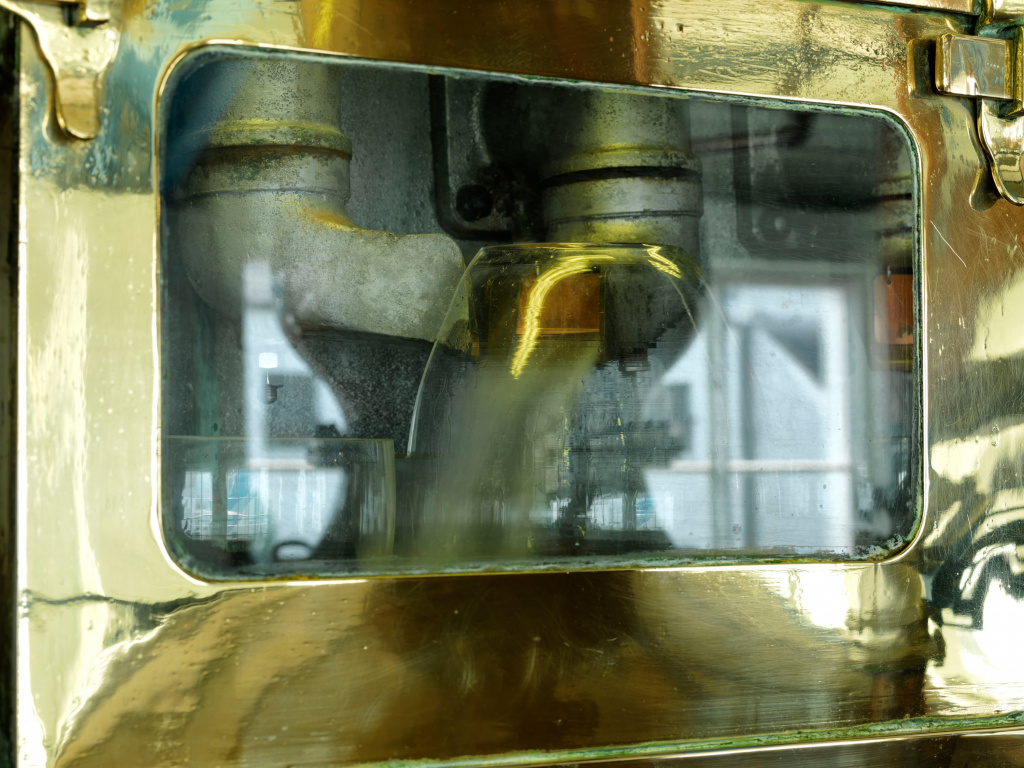 The man in charge at Laphroaig is John Campbell, master distiller and distillery manager, who has held the post since January 2006. Remarkably, he is the first Islay native – or Ileach –  to hold the position in more than 200 years; he has been at Laphroaig for 24 years, having previously worked as a lobster fisherman. Campbell’s career in whisky began with the task of stencilling numbers onto newly-filled casks, going on to take up roles in malting, mashing, and distilling, before becoming assistant manager in 1999.

Laphroaig is one of just a handful of Scottish distilleries that still make a proportion of their malt in-house, rather than obtaining it from large-scale commercial maltsters, and Campbell considers this to play a significant part in the unique style of Laphroaig. Around 15 per cent of the distillery’s total malt requirement is made on the four malting floors, with the rest being supplied by Diageo’s Port Ellen Maltings, and Crisp Malting on the Scottish mainland.

The overall phenolic level of all malt used at Laphroaig is around 45 to 50ppm, and according to Campbell, “Some of the unique salty, medicinal character we want in Laphroaig comes from the floor maltings. For one thing, we peat the malt before we dry it, whereas everybody else peats and dries at the same time. That gives you a smaller range of peat flavours. We peat at a low temperature and then dry the barley, which gives our spirit a wider range of phenol flavours.”

When it comes to distillation, Laphroaig is equipped with three wash stills and four spirit stills, with the fifth still being added in 1967 to increase capacity, followed by another pair five years later. The spirit distillation boasts arguably the longest foreshots run of any Scottish distillery, a practice designed to eliminate the sweet esters that flow early from the spirit still, and which are not part of the Laphroaig character profile. A deeper ‘cut’ of spirit than its Islay neighbours produces heavier phenolics essential to the mature whisky’s style.

With nearby Ardbeg distillery currently in the process of increasing potential output by 100 per cent with the addition of a second pair of stills and more washbacks, Laphroaig also has plans to expand production in the not-too-distant future.

According to John Campbell, “We’re doing 34 mashes per week, making around 3.3 million litres of spirit a year, and we’ve been working flat out for 14 years now. We currently keep about 92 per cent of what we make to sell as single malt. We’ve cut right down on the amount that goes for reciprocal trading and to independent bottlers in recent years as we’ve worked to keep up with demand for Laphroaig.

“Hopefully starting work to increase production is getting close now, but it’s not just a case of adding a new pair of stills or we’d have already done it. We’ve carried out lots of experimentation over the last couple of years, looking at how we keep the character the same.”

“So, is it a case of keeping the same set-up we have but making it larger, or going back to the old ‘one to one’ balanced regime they had in the 1960s, before the fifth still was installed? Either way, we could be talking about increasing capacity by up to 100 per cent.”

According to Campbell, “From the current 15 per cent of malt we make in-house, we will increase floor malting at least proportionately when we expand. We will move the visitor centre out of its present site and claim that space back for more malting capacity.” 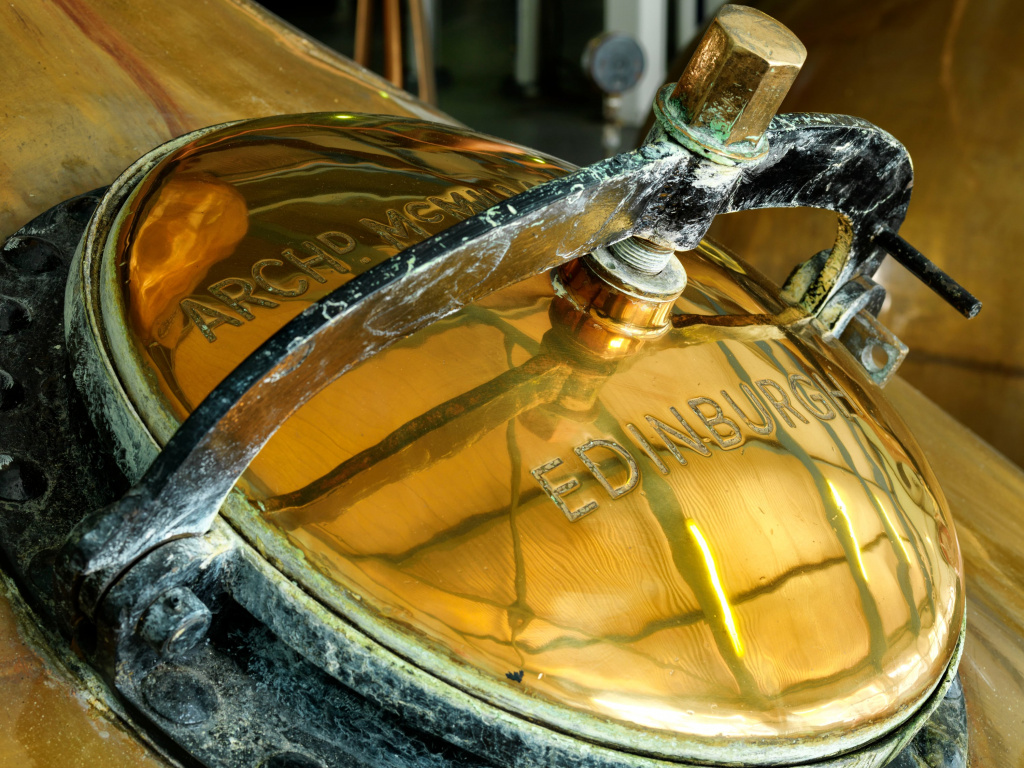 For many years, the 10-year-old expression was the principal Laphroaig available, but in 2004 Quarter Cask was added to the portfolio. Quarter Cask draws its inspiration from the small casks often used to transport whisky on horseback during the 19th century, and the smaller casks provide up to 30 per cent more contact between the wood and its contents, thus intensifying the maturation process.

Subsequently, additions to the core range have included a 25-year-old in 2007, an 18-year-old in 2009 and Triple Wood (previously exclusive to travel retail outlets) during 2011. Like Quarter Cask, Triple Wood is bottled at 48%VOL and carries no age statement. Initial maturation takes place in ex-Bourbon barrels, before spirit of varying ages is transferred into quarter casks for a period of secondary ageing, with a final spell of maturation occurring in European oak ex-Oloroso sherry casks.

In 2016 the NAS variant Lore was introduced, while each year sees a limited release under the name Cairdeas, which means ‘friendship’ in Gaelic. A different Cairdeas bottling has been released annually since 2008, with wide diversity of character due to the chosen maturation regime. The 2019 expression is essentially a cask strength version of Triple Wood.

A 10 Year Old Original Cask Strength was first released in 1995, and the latest batch is 011, bottled at 58.6%VOL. John Campbell says that “It’s good to have the 10 Year Old Cask Strength back in the domestic market. For some years, it’s only been available online and in the USA, due to lack of stock, but we know it’s always been very popular.”

Meanwhile, the 2019 annual release of Laphroaig 25 Year Old Cask Strength has been matured in a combination of European oak sherry casks and ex-bourbon barrels, and bottled at 51.4%VOL. 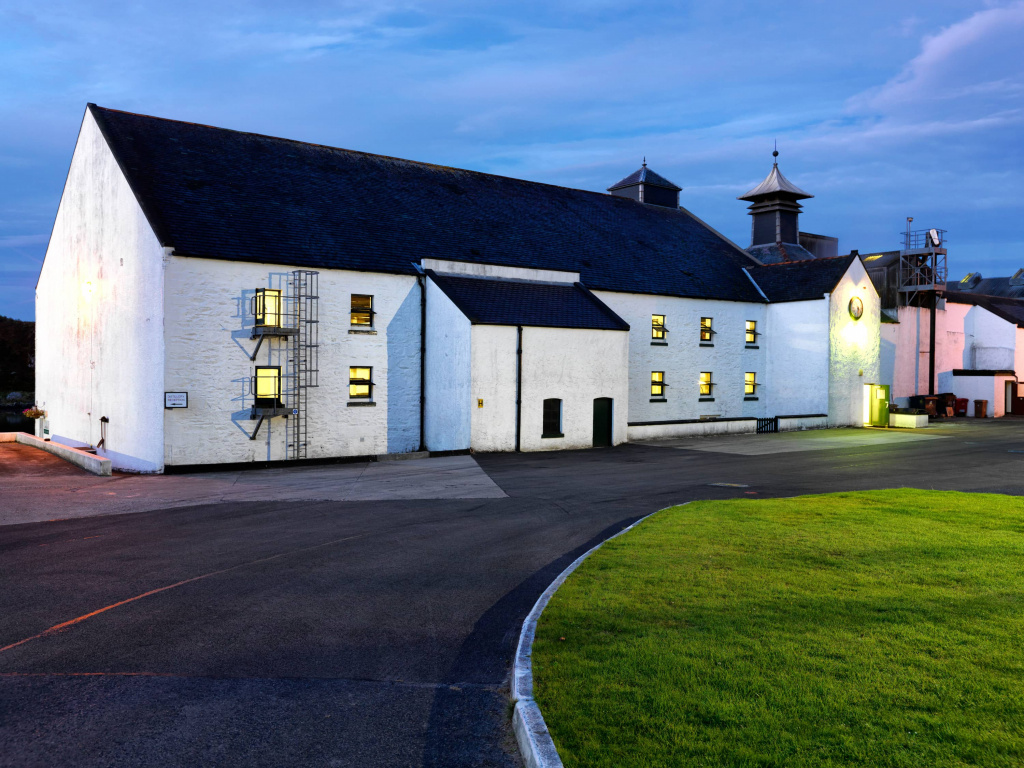 There is no better place to buy a bottle of Laphroaig than the distillery itself – apart from The Whisky Shop, of course! – and visitors are well catered for. The distillery offers a number of varied visitor experiences, including the Hunter’s Hike, during which participants enjoy a dram at the distillery water source, cut peat, and then return to the distillery to tend the barley on the malting floors. Between 25,000 and 30,000 people make the pilgrimage to Laphroaig each year.

In 1994 Laphroaig devised a marketing innovation in the shape of the ‘Friends of Laphroaig,’ which now boasts in excess of 260,000 members worldwide. Each Friend of Laphroaig is given a lifetime’s lease on a square foot of land at the distillery and the annual ‘rent’ takes the form of a dram.

The number of ‘Friends’ is still growing, as is the world’s thirst for Laphroaig, with its unique and distinctively peaty, medicinal charms. 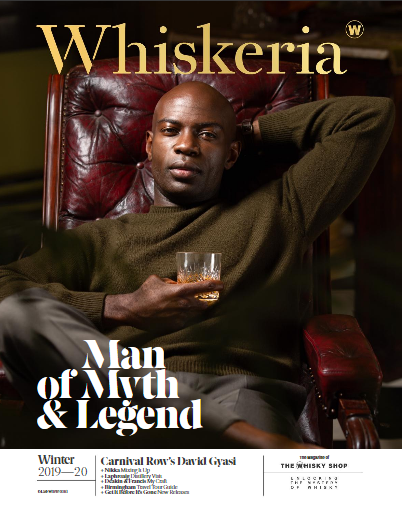 The original feature is our cover story in the Spring 2020 edition of Whiskeria, delivered to the door of W Club subscribers and also free with any Whisky Shop purchase in store or online. Click here to read the full Winter 2019 / 2020 issue of Whiskeria online for free.