From the distillery’s founding in 1881, and for almost a hundred years, every single drop of whisky produced at Bunnahabhain went into a blend. It wasn’t until the late 1970s that the distillery bottled its own whisky, aged for 12 years, under a label inspired by the song ‘Westering Home’.

Westering home, and a song in the air,
Light in the eye and it's goodbye to care.
Laughter o' love, and a welcoming there,
Isle of my heart, my own one.

Now, some forty years and innumerable awards later, the distillery is releasing its oldest ever single malt: Bunnhabhain 46 Year Old Eich Bhana Lìr, meaning ‘the great waves of Lìr’. Taking its name from the Gaelic god Lìr, the powerful ruler of the sea who would use his great white waves to wash ashore his most precious gifts, this 46 year old is itself a precious gift. Each one of the 198 bottles that exist has been handcrafted by skilled Italian glass blowers and metal workers to depict the great white waves of lore.

Presented at a cask strength of 41.8% abv, this non chill-filtered Islay single malt has a wonderful deep gold colour. The nose is elegantly complex; old leather and beeswax mingle with candied orange peel and manuka honey in a seductive aroma. Rich and silky on the palate, a refined balance of malt and citrus with heather honey, roasted nuts and a ginger spice precedes the long and satisfying finish.

Now available to pre-order at The Whisky Shop – only available while stocks last. 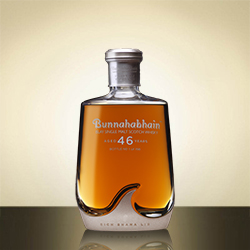