There are a few events in the calendar that true whisky die-hards await with the excitement and impatience of a child on Christmas Eve. From the Islay Festival in May to Diageo’s Special Releases in October. Fortunately, they are well enough spaced out to keep us happy all year round and January’s treat for the past eight years has been the release of the Glenmorangie Private Edition.

Since 2010, the distillery named for the Glen of Tranquillity has introduced limited edition single malts that take the award-winning Highland spirit in a slightly different direction. Beginning with the PX cask-matured Sonnalta in 2010, through the floor-malted Maris Otter barley of Tusail in 2015, to the sweet and syrupy Malmsey Madeira notes of Bacalta last year, each release in the Private Edition series has surprised and delighted in equal measure.

The latest in the series is no different, proving the old adage that variety is the spice of life. Glenmorangie Spìos (literally meaning ‘spice’ in Scots Gaelic and pronounce 'spee-oss') is the first single malt to be wholly matured in American ex-rye whiskey casks and brings some of that characteristic rye spice to the famously smooth Highland single malt.

Fresh and herbal on the nose, with notes of cherry, mint toffee and cloves before freshly cut green grass. The palate brings a burst of rye spice, earning Spìos its Gaelic name, before clove, toffee, cinnamon and nutmeg emerge with sweet vanilla. The finish is rich and sweet with toffee, Brazil nuts and a citrus tang lingering. 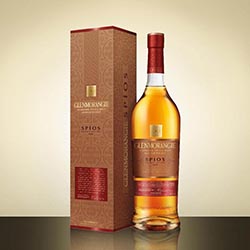