The Macallan: From School Books to the Record Books

What makes The Macallan so special? We take a look at the whisky that grew from humble beginnings to the most expensive in the world

What makes The Macallan so special? We take a look at the whisky that grew from humble beginnings to the most expensive in the world

As one of the most recognisable brands of Single Malt Scotch Whisky in the world, The Macallan is essentially Whisky Royalty. Deriving its name from two Gaelic words, “Magh” meaning a fertile piece of land and “Ellan” meaning “of St Fillan”, an Irish monk who travelled Scotland spreading Christianity in the eighth century, The Macallan was founded in 1824 by local barley farmer and school teacher Alexander Reid who became one of the first legal distillers in the country following the Excise Act of 1823. From humble beginnings to one of the industry’s biggest names, the distillery attributes its success to the Six Pillars: the foundation stones to the essential character of The Macallan.

Spiritual Home
Easter Elchies House was built in 1700 and is located in the heart of The Macallan estate, which spans some 390 acres of land in Speyside.

Curiously Small Stills
The Macallan stills are the smallest in Speyside and contribute to the distinctively rich and fruity character of the new make spirit. The stills achieved national recognition when they appeared on the reverse of a Bank of Scotland £10 banknote.

Finest Cut
An incredibly selective cut of only 16% of the final distillation is collected from the spirit stills at an exceptionally slow rate of boil. This cut, comprising “the heart of the run”, is one of the smallest in the whisky industry.

Natural Colour
No artificial colouring is ever added to The Macallan bottlings meaning that the range of rich colours from light oak to darkest mahogany can be attributed solely to the wood of the casks.

The Macallan Itself
Described as the peerless spirit, the liquid produced has transformed the distillery from a small local enterprise in 1824 to the producer of one of the world’s most sought-after whiskies, holding the Guinness World Record for the most expensive whisky ever sold at auction, with all profits going to charity.

Sherry Oak
Matured exclusively in sherry seasoned casks, built from both Spanish and American oak giving a beautifully dark flavour with rich aromas. Spanish oak sherry casks are the most expensive of all cask types used to produce whisky and The Macallan imports the lion’s share of all new sherry casks imported to Scotland from Spain.

Described as “a distinguished dram for a respected gentleman”, The Macallan 25 Year Old Sherry Oak is a rich mahogany in colour, with citrus on the nose balanced by cinnamon, sherry and wood smoke. The palate is full and rich with dried fruits and more wood smoke, while the finish is long with dried fruits, wood smoke and spice. Bottled at 43% abv and matured for at least a quarter of a century in Spanish and American oak sherry seasoned casks, this fine single malt is available to buy online at The Whisky Shop for £949 while stocks last. 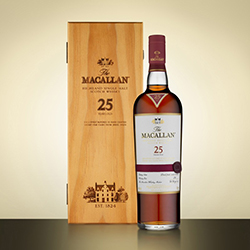 In stock and available to dispatch while stocks last

More from The Macallan