Gavin D. Smith goes behind the scenes at Johnnie Walker Princes Street to discover why Diageo's new Edinburgh whisky experience is the talk of the town. 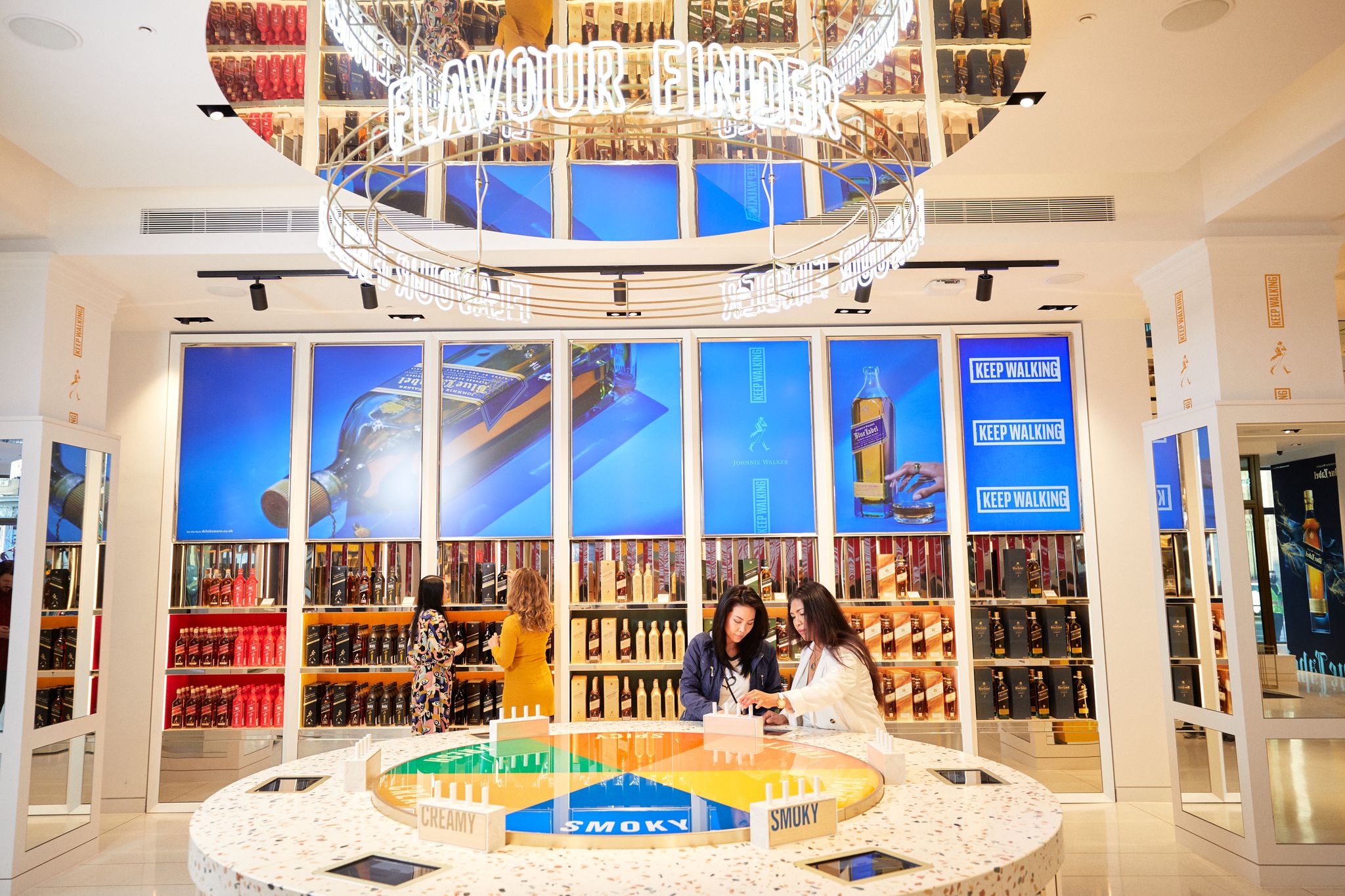 The grand corner building on Princes Street in the West End of Edinburgh's New Town was far too prestigious to remain empty for long, however, and in 2018 it was announced that distilling giant Diageo intended to turn the site into 'Johnnie Walker Princes Street.'

In early September of this year, the venture celebrating all thing Johnnie Walker was unveiled to the public, taking centre stage within Diageo's £185million investment in Scotch whisky tourism - the largest single investment of its kind ever seen in the sector.

Occupying all eight floors of the former department store and covering a cast 71,500 square feet, the attraction is described by Diageo Chief Executive Ivan Menezes as "A landmark investment in Scotch whisky and into Scotland and it sets a new standard for immersive visitor attractions. It celebrates Scotland's remarkable heritage, our incredible skilled whisky makers, and looks to the future by engaging new generations of consumers from around the world in the magic of Scotch whisky."

He adds that "Consumers are looking more and more to understand what's in their products, how is it made, who are the people behind it? And as you look to the next generation of consumers coming through, there's going to be an increasing demand. For instance, the thirst for product knowledge in China is extraordinary."

"Whisky tourism" in Scotland was growing significantly before the arrival of the pandemic, with Scotch Whisky Association figures for 2019 recording that it was worth £85 million to the Scottish economy, accounting for almost 2.2 million visits, with an average spending figure in excess of £39 per head. Ivan Menezes declares that "We do believe out-of-home spending and experiences are going to come back very strongly. It's right at the top of the list of what people want."

There is also the not inconsiderable fact that Johnnie Walker is the world's best-selling whisky brand, accounting for 18.4 million 9-litre cases in 2019, making it the sixth most valuable spirit brand globally, worth an estimated £2.89bn. It is available in no fewer than 180 countries, and is unchallenged as the most valuable commercial brand to com out of Scotland, having been established 201 years ago.

All of which goes to explain why Diageo would choose to promote and celebrate its leading whisky brand in the country's capital city of Edinburgh, but just what is all the fuss about on Princes Street?

According to Diageo, the Princes Street venue "Takes the concept of personalisation to a scale never before seen in a global drinks' visitor experience. Visitors on the Johnnie Walker Journey of Flavour tour will have their personal flavour preferences mapped with drinks tailored to their palate. With more than 800 flavour combinations available in the innovative dispensation systems, one person could visit Johnnie Walker Princes Street every day for more than two years and not have the same experience twice."

It all begins in what was previously House of Fraser's perfume and make-up section, now transformed into a welcoming, bustling reception and retail area. Here with the aid of an iPad and a friendly member of staff - one of 150 speaking a total of 23 languages employed on site - personal flavour preferences are logged, and a coloured wristband assigned according to your "fresh," "creamy," "smoky," "spicy," "fruity," or "tropical" tastes.

The reception and retail areas are open to members of the public, as are the attraction's bars, but fore those wishing to delve deeper there are three tour options - see www.johnniewalker.com for details and online booking.

The most popular version, lasting 90 minutes and costing £25 per adult, is the aforementioned Journey of Flavour Tour which gets underway in the Whisky Makers' Cellar, where participants begin to get an idea of just what is involved in creating a blended Scotch whisky by veteran Johnnie Walker Master Blender Jim Beveridge OBE and his 11-strong team.

Effectively, the cellar is a bonded warehouse in the centre of Edinburgh, as 26 hogsheads are maturing there, ultimately to be combined to produce a limited edition blend in late 2022.

Each of the 11 members of the Johnnie Walker blending team have produced their own blend, available from a series of eye-catching steel and glass dispensers. Ambassadors serve drams from the dispensers according to personal flavour preferences, and play informative audio recordings of the blenders who created them, explaining which component whiskies they selected and what those whiskies contributed to their blend's character.

Back above stairs once more, it is time for some theatrics, as a highly professional performer interprets the history of the Johnnie Walker brand from its origins in a grocer's shop in the Ayrshire town of Kilmarnock to its current best-selling status. Video screens, special audio effect, and even a conveyor belt on stage all come into play, not to mention a top hat and cane, in this dynamic and undeniably impressive display. Arguably, the highlight of the entire tour.

Next, it is cocktail time in a dedicated room equipped with what looks like a series of high-tech coffee machines, which dispense the appropriate style of highball for your flavour profile, courtesy of a microchip on the glass base that identifies the relevant recipe. A different expression of Johnnie Walker is used for each variant; for example, the "tropical" version is made with Johnnie Walker Gold Label Reserve, while "fruity" is concocted from Black Label.

Next up is an exploration of how a number of key distilleries influence the character of various Johnnie Walker expression, with more clever visual effects projected onto the walls and ceiling. The room contains four stations, each representing one of the four distilleries that have been rebranded as the "Four corners of Scotland," namely Glenkinchie, Cardhu, Clynelish, and Caol Ila, and audio presentations by members of the Johnnie Walker team explain their contributions to the Johnnie Walker style, as well as those of other malts and grains. The whisky making process is also explored, along with the many permutations of maturation.

An Archive Room comprising old documents and adverts relating to Johnnie Walker from Diageo's superb and extensive archives offers a great insight into the history of the brand, but or those with a recurring thirst, it is time to visit the Tasting Room. 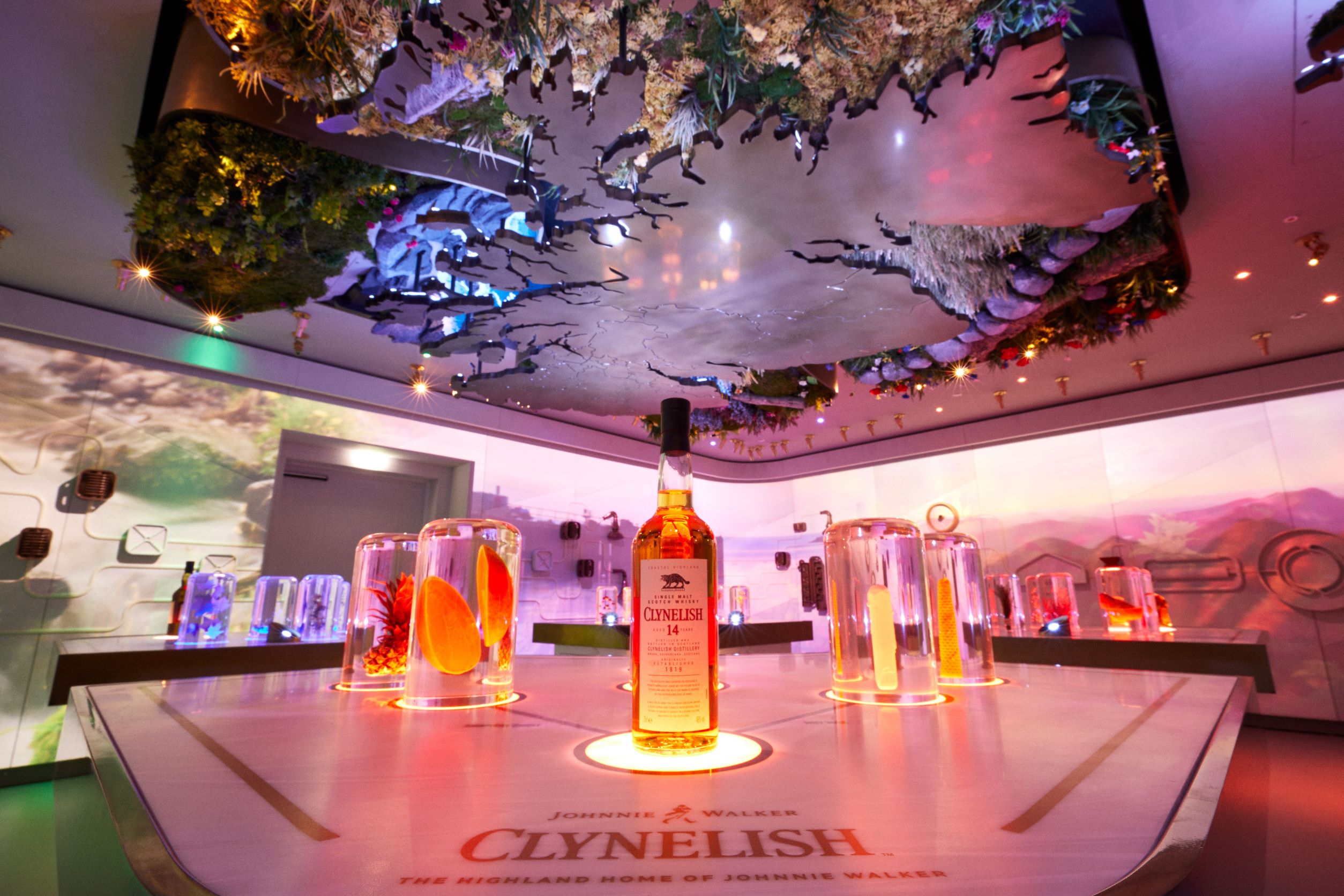 A choice of a Highball or Old Fashioned cocktail made with whichever flavour profile you originally opted for is an offer, and from there on it is bars all the way to the very top of the building.

First is the Explorers' Bothy Bar, complete with 150 different whiskies and a mission to "Explore whisky in a more diverse light," tying in with key messages of the tour that "whisky is for everyone," and you should drink it any way you choose.

The piece de resistance, however, is the eighth floor 1820 cocktail bar where, according to Diageo, "Drinks are paired with a carefully curated menu sourced from, and representing in culinary form, the four corners of Scotland." An open terrace offers spectacular views of Edinburgh Castle, and a strategically placed life-size, saltire-clad Johnnie Walker makes this an Instagrammer's dream.

Time to take a breath here and review that experience that has taken place in the past 90 minutes or so. While there is lots of hi-tec gadgetry, leading one visitor to describe it as "an audio-visual tour de force," there is also plenty of human interaction with very enthusiastic and charismatic members of staff.

A particularly good piece of news for locals is that the much-loved Binns' clock has been fully restored, with its hand-painted Highland figures once again marching out of the clock to mark the hour and half hour, while the tunes of Caller Herrin and Scotland the Brave are heard every 30 minutes.

Once again, the clock provides a meeting place for friends, lovers and would-be lovers, while the old department store itself is playing its part in bringing dynamic new life to Princes Street, and providing a source of knowledge and pleasure for whisky lovers from home and abroad alike. 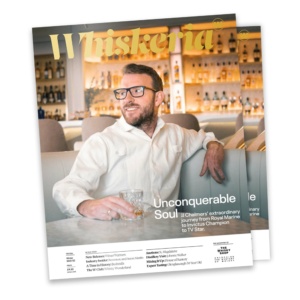 The original feature is from the Winter 2021 edition of Whiskeria, delivered to the door of W Club subscribers and also free with any Whisky Shop purchase in store or online. Click here to read the full Winter 2021 issue of Whiskeria online for free.