Andrew Fairlie: A Man For All Seasons

With a focus on passion, quality and premium provenance, Scotland’sonly two Michelin starred chef AndrewFairlie, is a man after our own hearts.Who better to help us get in the foodie spirit this festive season?

We met Andrew at the home of his eponymous, two Michelin starred restaurant: Gleneagles. Our first task? To visit the incredible secret garden. Rarely opened to visitors, it was established by Andrew and his team to ensure every item on the menu really is of Scottish provenance. 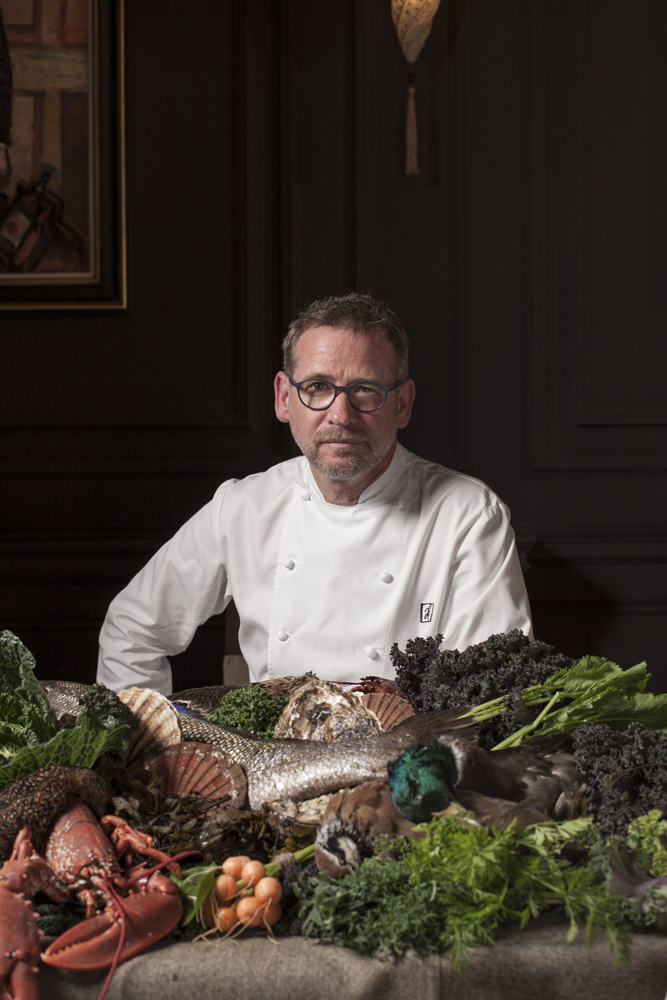 We took the secret garden over about 3 and
half years ago. This year has been brilliant. I love
it, coming down in the morning, it’s so peaceful.

How we see the garden is as an extension
of the restaurant, it’s just 7 miles away. There’s
a kind of honesty and integrity to what we do,
where we really do follow the seasons.

You've always used Scottish produce as your
starting point – has the garden revolutionised the way you think about provenance?

I’ve always been of the opinion that, if you’re in France, Spain or Italy, they
don’t even think about that. Of course you
would buy from the local market.

We’ve always had the philosophy that any
self-respecting chef would buy locally. You
don’t have to go out and put it as part of your mission statement, as it were.

But I think vegetables were always the
missing piece of our jigsaw. We can buy brilliant
meat, brilliant fish, all of that. And all pretty
much local. But the only downfall was having to leave that message on the answerphone to
some vegetable wholesaler at the end of the
night, then rely on them. Now, having done this,
we could never go back. It would be impossible. 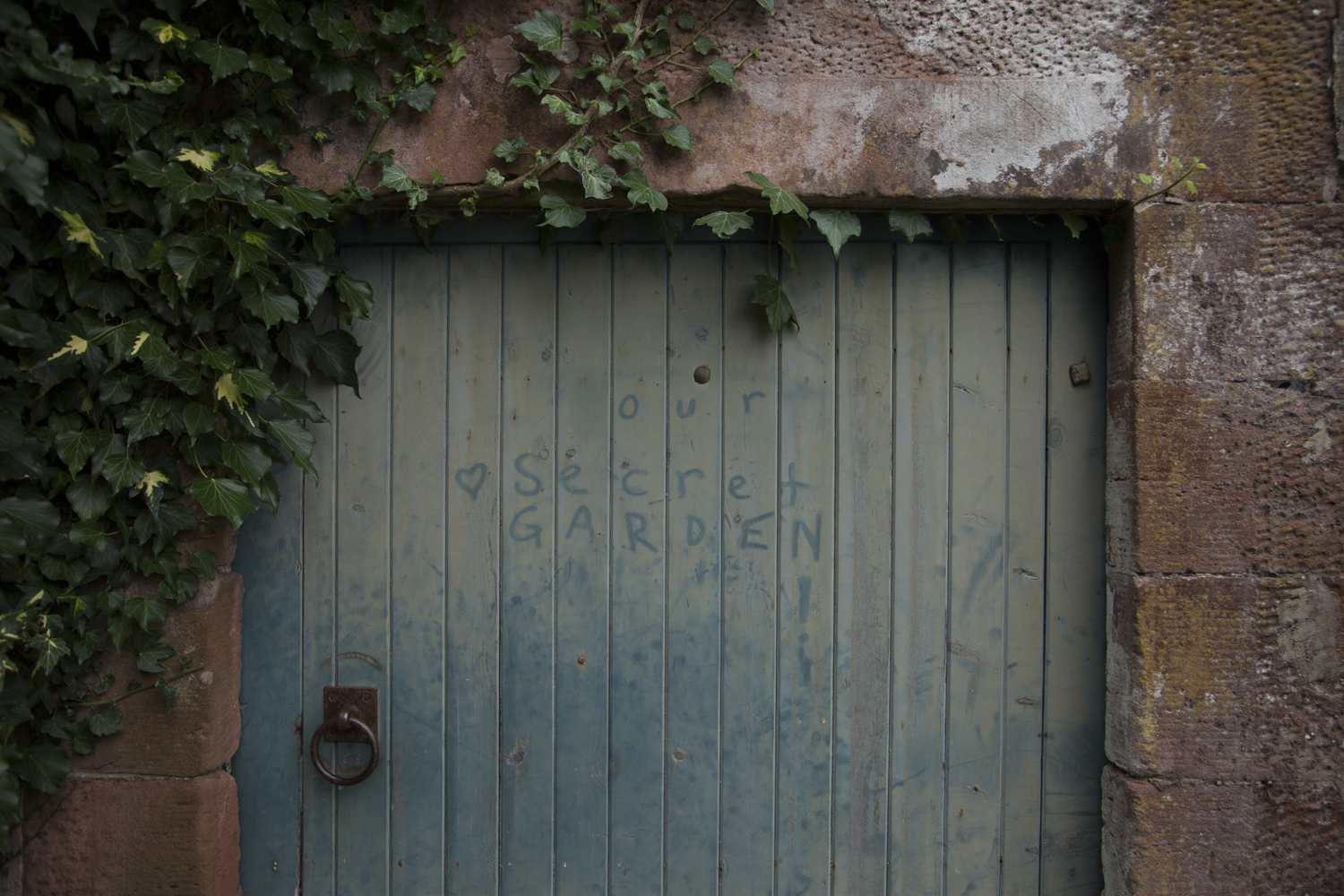 How long did it take you to change your
mind-set and – excuse the pun – bed into
the idea?

The objective was to always do this, but the
first six months were a real learning curve for us.

And that’s where the creative part of it has
been – i think for chefs – much more inspiring.
It’s easy, actually, to say “we have a menu, and
that works, let’s not touch it and leave it as it is”.
This forces you to actually have to change, and look for things, and be more creative with what’s coming your way.

Tell us more about how your kitchen runs...

What we do is very detailed. We come in in
the morning and make everything from
scratch: stocks, ice cream, breads; it’s all done every single day.

We’ve got a very particular way of working
in the kitchen – the way our service works with
timings is very confusing. There’s no other
kitchen that works like it. We communicate
only by calling times to each other.

So, for new guys coming in: they have a
time in their head and say, “I’ll be ready in six”,
but actually six minutes goes like that, and
they’re not ready in six. It’s a nightmare, in
the beginning.

How about the drinks team, do you have a
hand in what they do?

Wine lists will change with the food, as
they are geared up purely for the food. There
are wines you’ll never see anywhere else.

Everything seems very much like a team
effort. Very integrated. Take the cresses: we grow cress for the
table instead of flowers. Each front of house
member will sow their own, and three weeks
later can say, “I grew that”.

Where did you learn the quirks and
details you've introduced to the running
of your restaurant?

The management side of things, I would say I learned at Disney. Going from my
experience of kitchens that were pretty brutal – how kitchens were run at the 2 or 3-star level
I trained in – to Disney, where if you swore at
anyone it was immediate gross misconduct,
was a culture shock, to say the least.

But then, actually taking the principals
of how to manage and motivate people, and
how to run a business – it was invaluable. It was probably one of the best moves I’ve
ever made. 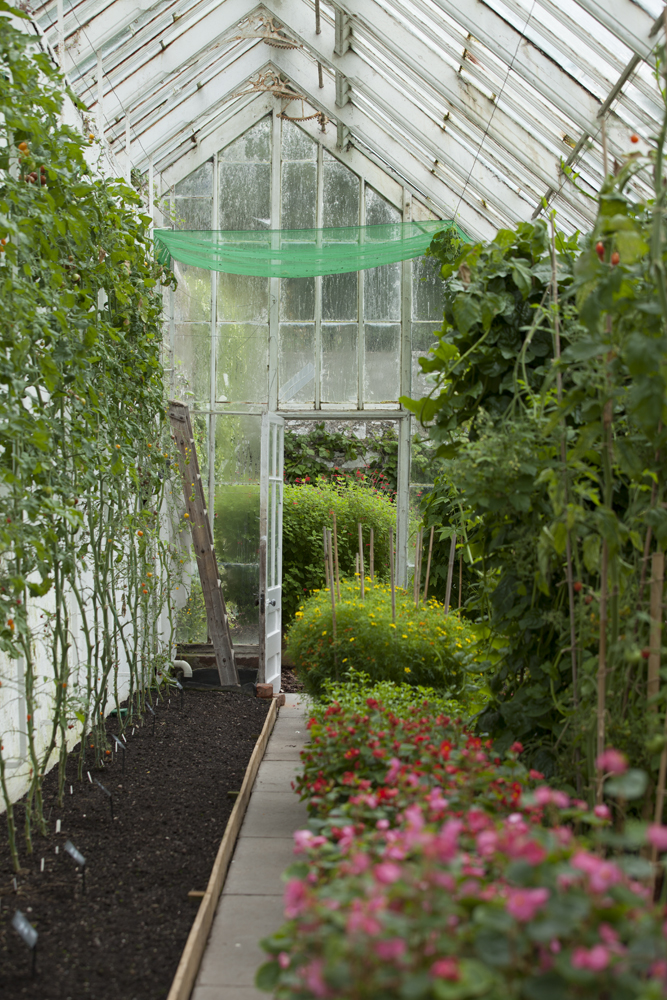 What inspired you to go and work at Disney?

Purely that – it was the management
training. It’s actually putting the staff and the
team – they’re the most important people –
first. Because if you get this bit right, the
guests are going to be wowed.

Is there anyone you've trained who you’re
particularly impressed by?

There’s one guy, Ian Scaramuzza – despite
his name, he’s from Maryhill in Glasgow. He
just won the Roux Scholarship. I won the very
first Roux Scholarship many years ago. My
prediction is he’ll be the first Scottish chef to get three stars. He is one of the best young
chefs I’ve ever worked with. We brought him
in as a commis chef.

What was the first restaurant you worked in?

The Station Hotel in Perth. I started my
apprenticeship there and finished it in London.
Then I won the scholarship when I was 20 and moved to the South of France. I stayed in France for five years, then I got travelling:
Australia, then working in Africa, then back to Paris where I did Disney. Then back to
Glasgow, then here.

Here now. This is the longest I’ve ever
stayed anywhere. But I grew up in Perth. I
love Paris. Paris and Glasgow, in that order. 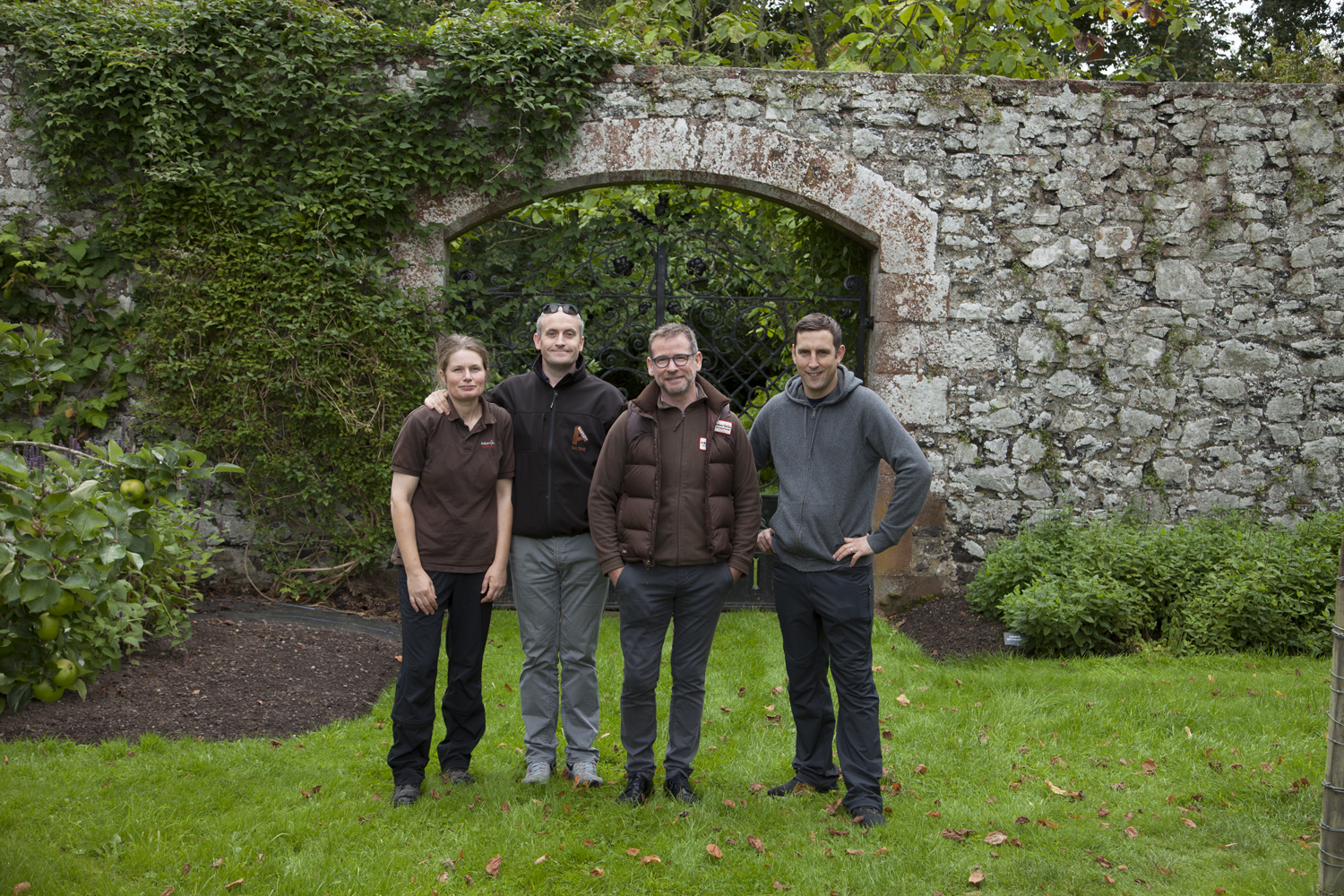 Do you interact with your customers much?

I tend to invite them into the kitchen. I’d
much rather they came in and watched a little
bit of service, where we can chat to them, and
where I’m more comfortable.

Are the majority of your customers the
real foodie types – people who are really
passionate about what they’re eating?

We get every spectrum. People who save up
for a really special occasion, people that book a table because they want to go there for their wedding day. And then we get people that dine
like that all the time. There’s a guy who flies
over from America to come for dinner!

Do you still take that as massive compliment – someone seeing your restaurant
as a destination?

Yes – that’s the thing. There’s not one single
day ever do we think... Oh you know, this is just
‘another service’. We try and tailor the service to whoever is there, so we never take it for granted.
We still get nervous every night before service,
and every day is a new day.

Do you think that level of care and
attention translates into what you’re
putting on the plate?

I think people can tell. There’s a few
restaurants I’ve been in, even when I was
younger – where I thought, my God you can
actually feel the energy from the plate, you
can tell that a lot of care and attention and
love and everything has gone into doing that.

And there are restaurants – great
restaurants – where you think, “oh, they’re
just going through the motions here. They’re
just churning out the same stuff every single
day, and it’s boring”. It might be beautiful
food, but it’s boring food.

Did getting a second Michelin star change
your attitude? Did it make you feel different?

The expectation I didn’t mind. In my head,
I opened a two star restaurant from day one.
That was my ambition– it was never said to
Gleneagles or anyone else – but, I think secretly
their expectation was that they needed to have
a Michelin star.

You know, I think our customers changed,
and our customers’ expectations changed. Try as we could to keep everything normal, the staff changed! It was just joyless in the first
six months. When summer arrived, I said to
Gregor, “I need to change this”. And the easiest
thing to do was open a new restaurant – the
same space, but change it.

With Jo Malone, we developed a scent. It was all foodie – lime and basil. And again, it
was all seasonal. We basically sprayed bay
leaves and stuck them under the tables. As soon as you walked in, the smell was
completely different. It’s kind of subliminal,
almost. 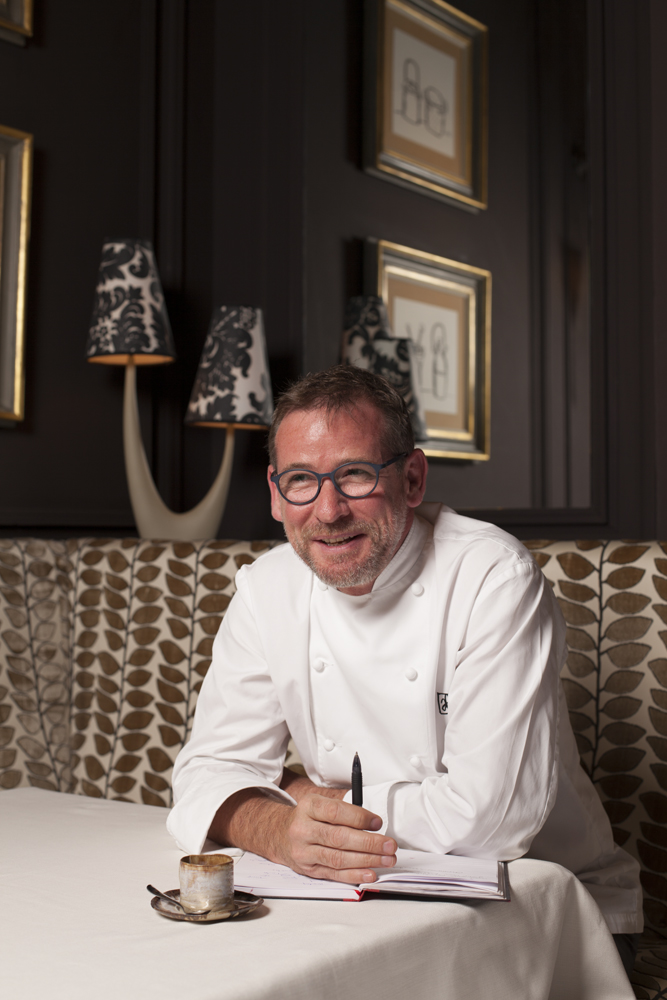 So, what do you plan to eat this Christmas?

Do you have any christmas rituals or
foodie traditions?

Christmas for me has to be luxurious. It’s
traditional in a sense that we’re not reinventing
anything, but I will buy lobster, we will buy
seriously good beef, and things like that. I buy
in some great wines for Christmas; I always buy
great Champagne. It’s still a very special day.
It’s that one day where it is very luxurious.

Is it always you in the kitchen?

At Christmas I always cook, and
never do the dishes. Once dinner’s
finished... I don’t touch a thing after that! I cook even when it’s not Christmas. Generally, if I’m off, then I’ll cook.

I guess your family might feel short
changed if you never cooked for them!
Do your staff eat well too?

We cook for the staff every day. If
we get something any bigger than that
[holds up tiny vegetable], then we can’t
use it. So, the staff get it.

Do you have a dish primarily inspired
by the garden?

The Secret Garden Salad. There has to be 20 things from the garden on it. But there
can be various preparations of all the different
vegetables that are there. Generally, it comes
out on a big plate. So, for example, the fennel
flowers – we take pollen from them, then we
use that to garnish.It’s probably the signature
thing we make.

Do you ever pair whisky with your food –
the special Adelphi selection you have in
the restaurant, for example?

It’s something I get asked all the time: do we match food with whisky? Probably Craig
[the Sommelier] is the best person to ask...

Craig: You can match anything with food. It’s where you
do it that becomes important. So I wouldn’t match whisky
with a starter course, because the great thing about chef ’s
cooking is there’s lots of little, delicate flavours. It’s all
about keeping the experience.

Whisky with cheese is quite interesting, and especially
the stronger cheeses. One of the things we do with the cask
strength whiskies here, instead of just having it on its own,
is we’ll give people a little bit of salted tablet.

So, Andrew, do you have any guilty pleasures?

Not any of the clichéd Scottish foods?

I don’t do Irn-Bru. I don’t do Buckfast. Don’t do any
of the Tunnock’s stuff. Deep fried Mars Bar is something
people always say... but I’ve never actually seen anyone
do a deep fried Mars Bar. Cheese on toast is about as
outrageous as I get.

Do you have any foods that you can never reconcile
yourself with?

Wild rice, and brains. I can’t do brains. There’s not much
I don’t eat. I went to Japan a couple of years ago and there
were a couple of things in Japan that... tested me. And it’s all
live as well. So live snails and things like that.

Do you have livestock – or anything ‘living’ – grown, or
nurtured, especially for you?

We have little suppliers for poultry with a very tiny
small holding in Ayrshire, where they basically breed for
us. Pretty much all our suppliers are like that. Take our
game supplier: woodcock are very rare, so if they do get
woodcock, then generally he’ll save them for us.

And will you have a big Christmas staff do?

Outwith here. Last year we went to Drummuir
Castle. So we took that privately, took all the staff,
and had a hooley for two days.

Discover more about Andrew Fairlie at Gleneagles by visiting the website.

Pick up your copy of Whiskeria or read online to find out how you can win an exquisite meal for two in his two-Michelin starred restaurant.