Reawakened after 38 years, Gavin D Smith returns to one of Scotland's most iconic whisky distilleries. 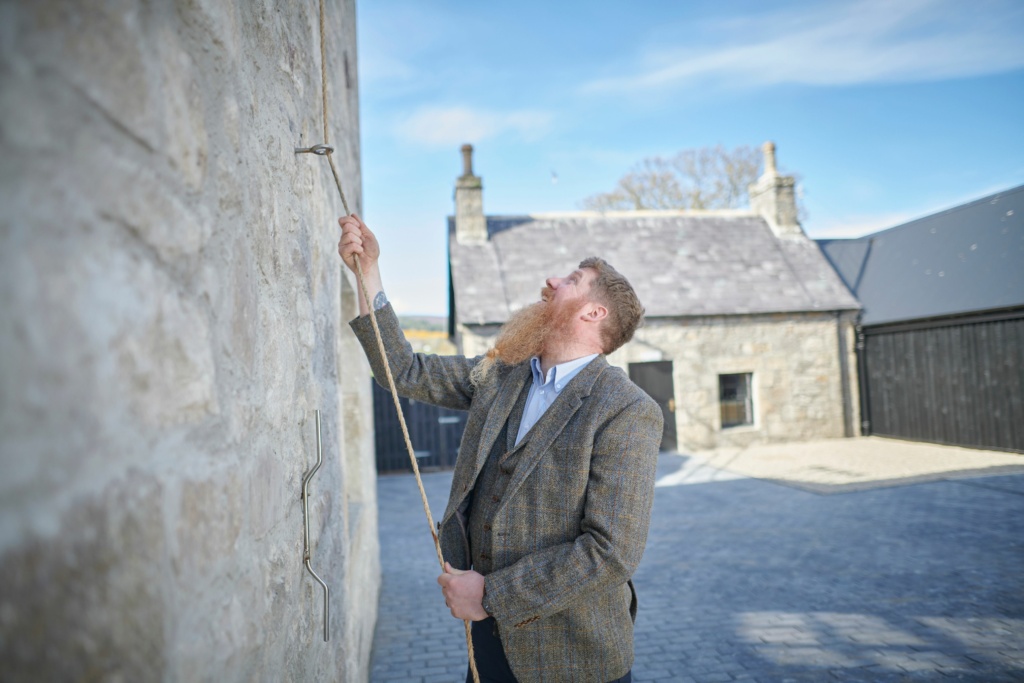 The early 1980s saw Scotch whisky making headlines for all the wrong reasons. After more than two decades of apparently relentless expansion of distilling capacity to fulfil growing demand, the scales tipped in the wrong direction and before long there was more whisky being made than there were consumers to drink it.

In order to lower the level of what the press termed the "whisky loch," distilling activity was substantially reduced, with industry leader the Distillers Company Ltd closing no fewer than 21 malt distilleries during 1983 and 1985.

Distilleries "lost" during this period were often of genuine historical interest and one of those to close was Brora, located some 60 miles north-east of Inverness on the Sutherland coast, where the last spirit flowed on 17th March 1983. Of all the DCL plants to fall victim to the programme of closures, few were so mourned in the years to follow.

Brora had been established under the name of Clynelish by the 2nd Marquess of Stafford in 1819 to provide an outlet for the barley crops grown by tenants on his estate. The Marquess marries Elizabeth, 19th Countess of Sutherland, and in 1833 was created Duke of Sutherland. The clan crest featured a Highland wildcat, which became the motif of the distillery.

Clynelish not only benefited from a supply of locally grown barley, but also abundant peat, while fuel was also provided by the local Brora coal mine, which had been in use since the 16th century.

The Sutherland family sold Clynelish to the Lawsons in 1846, and after blenders James Ainslie & Co and John Risk acquired it during 1896, a major programme of upgrading and expansion was undertaken.

John Walker & Sons Ltd bought into Clynelish during 1916, and Walker's duly became part of the Distillers Company Ltd (DCL) in 1925. Within five years DCL owned the entire share capital of Clynelish, subsequently moving the distillery into the care of its Scottish Malt Distillers (SMD) subsidiary. However, Clynelish was silent for most of the economically troubled 1930s, only resuming production just before the outbreak of the Second World War.

During the 1960s, DCL expanded and rebuilt many of its existing distilleries to cope with the increasing demand for blended Scotch whisky, and in the case of Clynelish, an entirely new modernistic plant was built during 1967 alongside the old production buildings.

The new distillery was named Clynelish A, while the old plant was designated Clynelish B. "B" was mothballed in August 1968, but was soon revived and renamed Brora. Between 1968 and 1981 Brora distilled heavily peated spirit, du to demand from DCL's blenders, before returning to a more typical "mainland" peating level.

While the new Clynelish, equipped with six stills compared to its predecessor's single pair, established itself as a reliable producer of malt spirit for blending, Brora languished in silence, though its warehouses were used to mature a range of DCL single malt brands.

For most people, Brora seemed certain to remain a "lost" distillery, but its pair of stills, tarnished and speckled with bird droppings, remained in situ, along with other pieces of equipment such as the feints and spirit receiver and the brass spirit safe, giving hope that one day a revival could be possible.

Meanwhile, Brora developed what is described by its owner Diageo, successor company to DCL, as "a cult legend" status among whisky aficionados, and in 2017, Diageo announced that the possible was about to become certain, as Brora was to be restored to working order, along with its fellow lost and lamented distillery of Port Ellen on Islay.

"Why wouldn't you reopen Brora?" asks Diageos Senior Global Brand Ambassador Ewan Gunn rhetorically. "It really was loved as a whisky. There had been an appetite from people across all parts of the Diageo business for it to happen for years. There was demand from inside and outside the company. And there was a feeling that it had to be soon or not at all."

"People like long-serving Johnnie Walker Master Blender Jim Beveridge have a 'memory bank' of experience from when Brora was working, and knowledge like that will eventually be lost. The only reason the stills remained in the stillhouse building would have collapsed. The stillhouse wall had a huge bulge in it and had been shored up for years."

Brora-local Master Distiller Stewart Bowman, whose father was distillery excise officer at the time of its 1983 closure, explains that "We removed the stillhouse wall and took out the stills to send them 200 miles across Scotland to Alloa to be worked by hand by Abercrombie coppersmiths. After almost 40 years of silence, they required some refurbishment. We then had to rebuild the stillhouse wall using the exact stones - a meticulous process indeed.

"Instead of a modern lauter tun, we installed an exact replica of the original rake-and-gear mash tun. The washbacks remained inside, but required replacing, and to remove these, we had to take off the whole pagoda roof, which we did in one piece, repaired in, and then placed it back. It was quite a feat of engineering and probably one of the only times a pagoda roof of this size has been removed in one piece like that."

Bowman adds that "The worm tubs that existed in 1983 had been removed as they were in a state of disrepair. These were replaced using existing archive information that allowed us to recreate them as closely as possible to what existed before.

"Using a combination of the tasting notes for the original new make spirit, the exact same stills, material from the archives and more modern distilling knowledge, we have managed to replicate, as closely as possible, all the equipment and processes used originally."

Restoration work on the distillery fabric and equipment was aided by the discovery of a bag of plans drawn up by the doyen of distillery architects Charles Doig of Elgin when he worked on Brora during the 19th century. Even the "dramming bell" on the stillhouse which used to ring twice a day to summon workers for their entitlement of whisky is once again in working order.

According to Ewan Gunn, "We will be making three styles of Brora spirit, just as they did in the past. We're currently making 'waxy' style, which will be the main one, but we will also do a peatier style and an 'earthy' style. We will do campaigns of peaty and earthy from time to time as required."

He adds that "We practise lengthy fermentations - longer than Clynelish at 90 to 100 hours - which allow esters to form, giving our whisky its intense fruity character. We are running the stills slowly, and there is a 'boil ball' in the spirit still which allows more copper contact and reflux, leading to lighter spirit, and although we use worm tubs which usually indicate a heavier style of spirit, we in fact run them hot, which also lends itself to a lighter style. We could make up to 800,000 litres of spirit per year, and we're gradually scaling up to that."

By next year, a biomass boiler, fuelled with woodchips will be operational, providing the site's energy requirements, rendering it carbon neutral.

The first cask of Brora was filled in May of this year, and while some of the spirit now being made is transported by road tanker for maturation in Diageo's Central Belt warehousing complexes, a portion is filled to cask and stored on-site. Warehouse One is the most favoured location, due to its situation close to the Clyne Burn, which promotes relatively high levels of humidity. 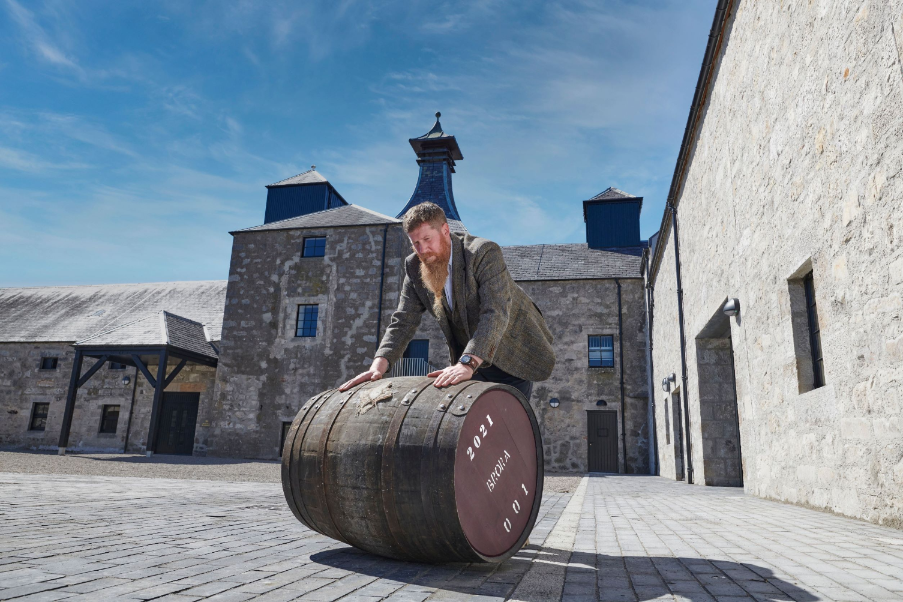 Asked to account for the enduring appeal of Brora single malt, Stewart Bowman says that "During the distillery's time of closure, the quality and rarity of its whisky was highly sought after as it began to be released as a single malt. It was a quirk of fate that it happened in this way as the majority of Brora distilled was never intended to mature for as long as we have seen. There is something in that almost accidental lengthy ageing that really brings to life the Brora character and an incredible new depth is revealed. That is certainly something that captures people's imagination."

On a personal level, Bowman explains that "I grew up in the village of Brora and I'm also the third generation in my family to work at the distillery. I have strong memories as a child playing in the distillery courtyard, so Brora has been a big part of my life for as long as I can remember. In 1983, my father wrote in an old distillery ledger "Commencement of Brora Distillery silent season (undetermined period)."

"Growing up in the village we often wondered whether Brora would ever return."

If you wish to see for yourself, how Brora has been brought back to life, the distillery offers an option of two tours available by advance booking.

The three-hours-long "Brora Awakened Tour" costs £300 per person and, in the words of Diageo, "Guests are invited to... explore the historic spirit that was almost lost to the world, and craft the Brora of today.

"Glimpses of Brora's storied past are brought into the present day through original archive materials, personal tales from distillery workers before 1983 and, to complete the immersion in Brora, tastings of Brora's celebrated recent releases."

Costing £600 per person and lasting between four and five hours is the "Eras of Brora Tour." Diageo notes that "The past, present and future eras of Brora are explored in this engrossing day-long experience.

"Guests will help craft the Brora spirit standing side-by-side Brora's craftspeople of today as they go about their careful work to lay down casks for maturation. Journeying through tastings of new spirit and samples distilled almost half a century before, the visit culminates with a private tasting of fleeting moments of Brora's storied past in the Brora Triptych."

Both tours include lunch and further details can be found at Brora's website, where bookings may also be made.

For visitors who are inspired to take away a souvenir of their time at Brora, a 39-year-old distillery exclusive single cask bottling from a refill American oak hogshead may be purchased for £8,500. For those with even deeper pockets is the aforementioned Brora Triptych, as stocked by The Whisky Shop, and costing £36,000. Interested customers can enquire at their local store.

Triptych was released earlier this year and comprises three 500ml bottles, named Elusive Legacy (1972), Age of Peat (1977), and Timeless Original (1982), presented in a beautifully crafted, bespoke presentation box. As Ewan Gunn explains, "Triptych showcases the three styles of spirit for which Brora is known, and there will be probably be no 'new' Brora for a long time as it was generally felt to get better with age."

If visiting Brora, it would be rude not to take a tour of its neighbouring 1960s usurper, Clynelish, which has recently received a major reimagination of its visitor experience, allowing for the entertaining exploration of its strong links to the Johnnie Walker family of blends.

As the twin Brora gates close, the wildcat emblem of the Sutherland clan and Diageo's northernmost distillery comes together against the backdrop of reassuringly solid stone buildings. Sadly, the Scottish wildcat is a threatened species in its native habitat, but this particular wildcat of the Highlands is very definitely off the endangered list. 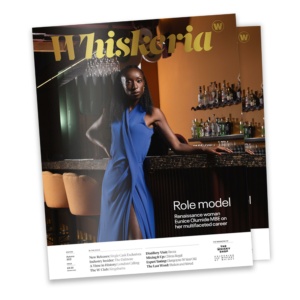