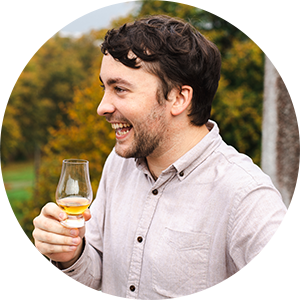 Behind the Curtain: Graham McTavish

You might not think it, but Trafalgar Square at 6AM is a serene place. Graham meets us underneath the giant pillars of the National Gallery. He immediately leads conversation on the book he had just closed, Crucible of Hell: The Heroism and Tragedy of Okinawa. After nearly 40 years in the performing arts, it's clear that his buoyant charm is not dampened by an early start. In the course of his career, Graham has established himself as one of the most recognisable Scottish actors of his era. After starring roles in Outlander, The Hobbit, his travel show Men in Kilts, and hundreds of other productions, Graham lies at the representational vanguard of how Scotland and the UK is perceived by millions across the world. But as we find out with Graham, the apparent simplicity masks a much more complicated process.

In this behind-the-scenes blog, here are some questions and answers that didn't make the cut for our Summer 2022 Whiskeria, but give a sneak preview into our lead feature.

Graham: I've kind of given up on beer now, I just can't do it. Occasionally I'll have a beer but I just can't take the volume of liquid, so I stick mainly with wine, now and again. Red, white, rose ... as long as it's good I don't really mind. I wish I knew more about wine! Though I wish I knew a lot more about everything, you know, not just drink. I think sometimes I've managed to bust my way through life without an expert understanding of a great deal, but somehow it managed to do.

Angus: Do you feel Scottish?

Graham: Yes definitely. Through three years in Canada, and then some time in in Scotland when I was wee, as well as England I guess I was very influenced by my father as well. You know it's a strange thing, you know, your identity I think it comes from many, many, many things, not just where you were physically born. I mean I have a Zambian friend, though you would think he's Irish. He looks Irish, he has lived most of his life in Ireland, but an extraordinary connection meant that he was born Zambian. I met somebody the other day who was Congolese, who looked about as Congolese as I do. So, identity has always been very interesting to me, and where we draw our identity from. The cultural influences on us, ancestry, the individuals who have really affected us influenced interests in our lives. All of those were really Scottish for me, partly because my extended family on my mothers side. But funnily enough, I didn't see that much of them, and they still had that influence. My grandfather wasn't alive when I when I was born. He was a big, big influence. And you realise that as you get older you are becoming these people. You realise, 'I am becoming my grandfather, and even my father!' My mother came from an Irish background, born in London, but her and her mother worked in Glasgow. They immigrated from Ireland and married before they left. Her name is Ellen, she married Jack, and they moved to Glasgow and worked not far from their Gallowgate. This was when it would have been really rough, really rough. I actually went and visited the church where they got married, and you realise that you come from this unbroken line of people on both sides of the family, and extended beyond that, people that have shaped who you are. You don't necessarily need to be educated by those people, but as long as you have their influence and their genes, it all counts. Scottish people are a different breed. You go abroad, particularly in the United States, and you find that people of Scottish descent can usually hugely identify with the country, and they really really do, more so than ever now. Something about it all. My ancestors came from Ireland to Glasgow, walked to Edinburgh to get married, and then settle down there. Like... what!

Angus: Funnily enough, my grandfather did the opposite journey. He was born in Glasgow, and walked through to Edinburgh looking for work.

Graham: They may have passed each other on the way, mine did the reverse! This would have been just after the First World War, 1919? They went out without knowing if there was any work at the end of it. Just thought, ‘well, I'm not getting anything here, I'll just walk to Glasgow’, what, 40 miles? I mean, just a totally different breed of people.

Angus: Did you find Scottish influence in New Zealand?

Graham: When you go into the South Island, there’s even more McTavish’s in central Otago than anywhere else. When they left Scotland to emigrate, they had nothing, mostly in rural poverty. A lot of these people would be domestic servants, they be they wouldn't have much they wouldn't necessarily even have a trade. But that didn’t stop them, they all just got on boats, and went as far away from Scotland as they could. And then, essentially, landed up in another Scotland. When you go to the South Island, you could be in the Highlands of Scotland.

Angus: Is there not some Scottish city somewhere in New Zealand that was modelled after Edinburgh? As in street by street?

Graham: Yes! Yes, it’s called the Gaelic name for Edinburgh, they modelled it entirely on Edinburgh. In fact we spent some time talking to a guy at the Dunedin’s Settlers Museum, these people arrived on boats and all there was bush, from the very shoreline right into the hills, and they would just have to hack their way through. Mud, trees, anything, just to create somewhere to live. Because a lot of them were sold a lie as well. They were told that there were these beautiful flat areas that they could settle in farmland, so the Scots had to dig their way into the interior and then they found gold, which was good news.

Angus:  I remember visiting a small suburb in Melbourne, Australia, called Macleod. I sort of stumbled upon it, and it wasn’t until I read a small plinth in the middle of the local park that I found out that my relatives, the Macleods from Skye, had founded the town only a century or so ago.

Graham: Hell, this all applies a bit more than I thought it would! I mean the MacLeod’s were more busy hacking through other Scottish clans, rather than the Australian bush! Very famously too, I mean all Scottish clans are violent, but the MacLeod’s are way up there. They really hated their rivals, they didn't think anything of burning 300 people alive, just a normal day!

Angus: You were the first to put on a play at the National Gallery with your friend Nicolas Pace?

Angus: Could you tell us briefly what happened?

Graham: Well the show was called ‘Letters from the Yellow Chair’. So yeah I honestly don't think about it, because you know I'm not I'm not 20, where that kind of thing happens to you. I wondered what Van Gogh would think of all this money being made off the back of him, hopefully, I always thought he would be able to see the funny side.

I got my equity card I was performing a one-man Beckett play. I mean I remember performing to one person in an Irish pub in north London, you know. It's just doing it that I enjoy. I’ll watch myself at a premiere, but I have no interest in watching myself otherwise, because I experienced it. And that's the thing that I do. I remember that Beckett performance really well, because I thought you know one person play, you have to do it. I don’t know if you know it?

Graham: Oh, hold on, did you see a televised performance? Patrick Magee, he was the original. He and I, funnily enough, share the distinction of being the only people to played the character of Krapp whilst actually manually operating the machine. I used to have the exact number second by second of where I had to get in, and when to press it to slow it down.

Angus: Did the one-man audience receive it well?

Graham: So, I did this whole performance to this one guy, and at the end of it I said, ‘well, do you want to have a drink downstairs?’ And I went downstairs, and I said, ‘what did you think?’ By the way, I was actually personally quite pleased with that performance! And he said, ‘I think it's better when its more staged’. Complete waste of time! An hour of my life I'll never get back.

Angus: Frankie Boyle is starring in Beckett’s End Game tonight, its being live streamed at 7:30pm. Exciting to see there are still Beckett plays being put on.

Graham: Wow! Amazing fit. A comic actor in these sort of roles works well. Beckett was a great fan of clowning, as well and there's that element with something like Krapp’s Last Tape and Endgame and Waiting for Godot, you need a comic side to you to be able to do it. I did it when I was 20 to get my equity card and you record the tape part of the performance, where the character is listening to himself as a young man. It has now occurred to me that because I still have the actual reel, that I could do it again now that I am older, and I would actually be listening to myself as a young man. I don't think it's ever been done before. I saw John Hurt do it, of course he was great. And a famous comedian called Max Wall did it he was another great, such a physical performance.

Graham: I would love to play Macbeth, I think that might be my favourite. I have never played him though. I have been Banquo occasionally, and there are also a slew of other great Shakespearean roles to play. The history plays - God!

Angus: What would your death-row dram be?

Graham: Springbank is the current one, love that one. The Showrunner on House of Dragon, the Game of Thrones prequel series, also loves it. Which, fair to say, has been a rather great coincidence.

Angus: And the soundtrack?

Graham: Oh, it would have to be The Clash, The Sex Pistols, The Jam. Something like that. The Dead Kennedy’s!

After wrapping up, it was late afternoon. Trafalgar Square was back to being a loud, bustling hive of activity. After being photographed on-the-go for over six hours, Graham, who had a busy schedule for the rest of his day, took time to thank each of us. He recorded videos for our family members, took selfies, signed books, and in a flash, he was off. It is always nice to have your expectations surpassed, but it's even better to have them surpassed with warmth.