Gavin Smith pays a visit to one of the Highland distillery scene’s most-hidden gems.

If you were going to paint a picture of a classic Highland distillery it might very well look a lot like Fettercairn. The buildings are traditional in design, whitewashed, with dark slate roofs, and there is a ‘pagoda’ on top of the old kiln. The distillery stands quietly on the outskirts of Fettercairn village, surrounded by grazing cattle and sheep, and growing crops, while in the background the lower slopes of the Cairngorm Mountains rise into the distance.

Fettercairn is situated in the county of Aberdeenshire, half way between Dundee and Aberdeen, but five miles off the busy A90 dual carriageway that connects the two cities. As such, the whisky it produces is classified as a Highland single malt. Like most Scottish distilleries today, it is not locally owned, but part of Glasgow-based Whyte & Mackay, which also includes Dalmore, Jura and Tamnavulin malt whisky distilleries in its portfolio. Whyte & Mackay in turn belongs to Philippines brandy specialist Emperador Inc.

Yet Fettercairn is managed by Stewart Walker, who was born and bred in the village, and who has now served 30 years at the distillery, while many of the workforce also boast long service. Fettercairn is very much ‘their’ distillery. 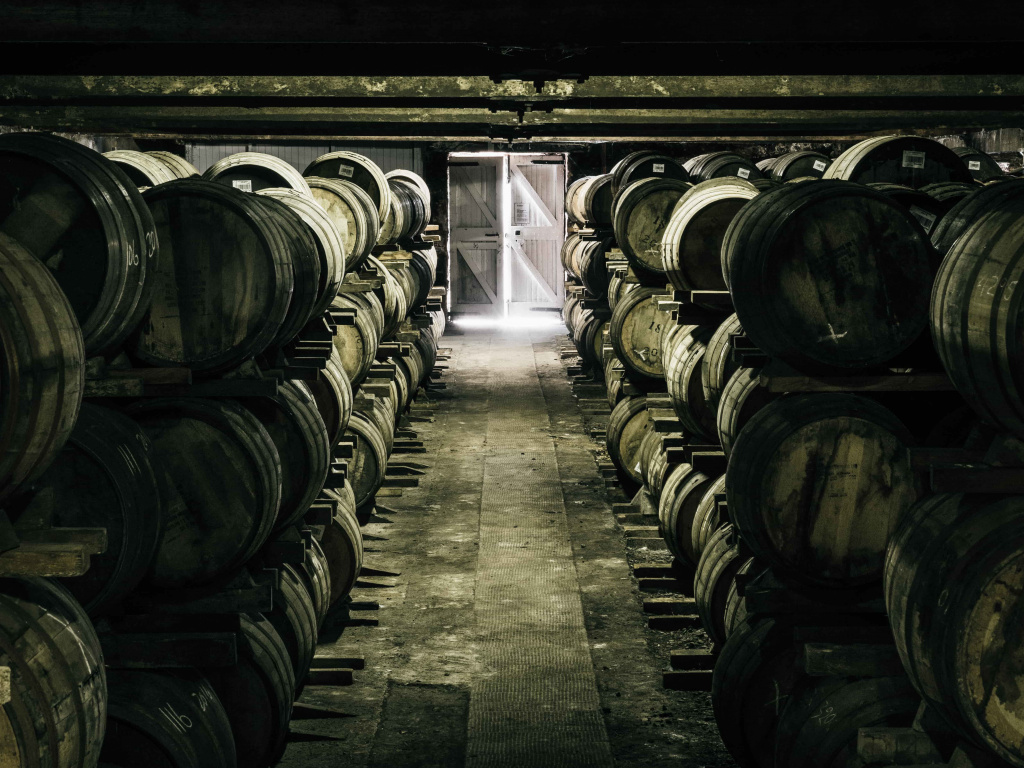 Its history dates back to 1824, when it was converted from a former corn mill by local landowner Sir Alexander Ramsay. The area was rife with illicit distilling in the early 19th century, and it is said that Ramsay recruited formerly illicit whisky-makers to operate his new venture, which was first licensed to James Stewart & Co the following year.

In 1830, Ramsay sold his Fasque Estate, including the distillery, to Sir John Gladstone, father of the future four-times British Prime Minister, William Ewart Gladstone. The distillery effectively remained in the hands of the Gladstone family until its closure in 1926, subsequently being purchased by Ben Nevis owner Joseph Hobbs’ Associated Scottish Distillers Ltd in 1939. 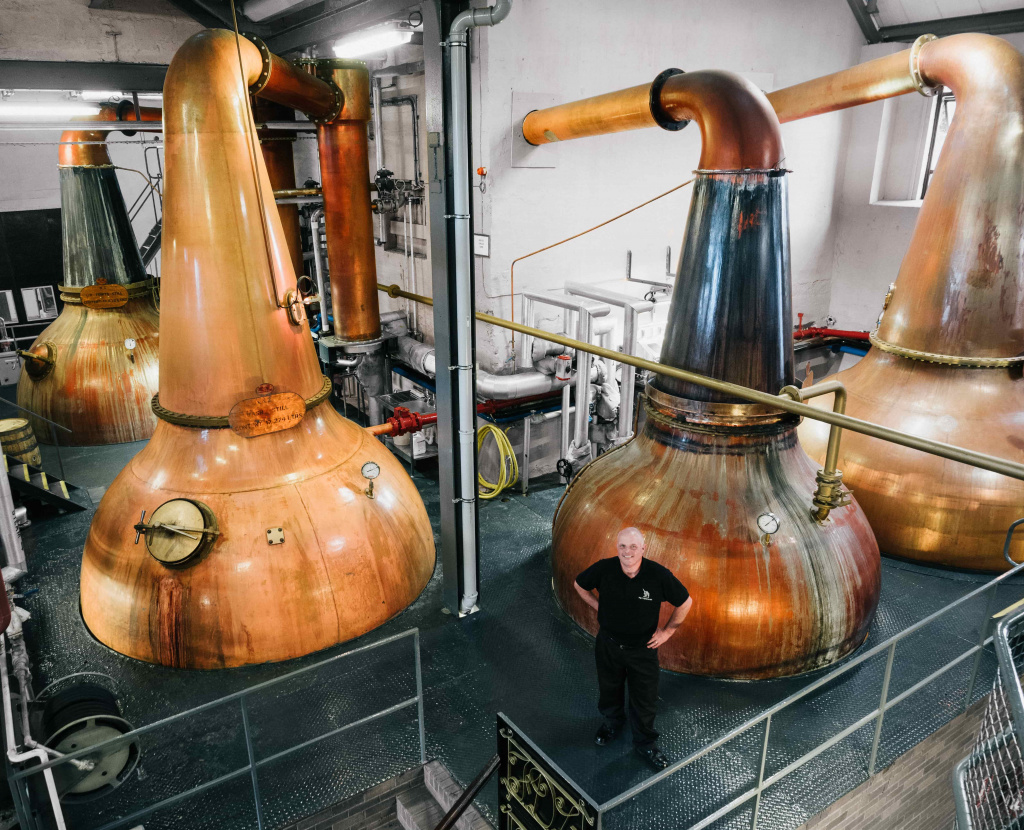 While attention was lavished on the company’s Dalmore and Jura single malt brands, Fettercairn had a much lower profile, being used primarily for blending purposes, most notably in the Whyte & Mackay ‘house’ blend. However, a decade ago, a serious attempt was made to give Fettercairn a credible single malt presence, with the introduction of 24, 30 and 40 Year Old vintages, followed by the NAS Fasque and Fior (Gaelic for ‘pure’ or ‘true’), which replaced the previous 12 Year Old. Fior comprised a significant amount of 14 and 15 Year Old spirit, along with 15 per cent heavily-peated 5-year-old whisky from first-fill bourbon barrels

Now, however, Fettercairn is in the middle of a new and dynamic chapter in its long history, with the previous range being superseded during 2018 by a 12 Year Old and a 28 Year Old, along with limited quantities of 40 and 50 Year Old expressions.

Andrew Lennie is UK Brand Specialist for Fettercairn, and joined the team a few months ago, having previously worked as Brand Ambassador for Fife start-up distillery Lindores. “This is a bit like starting with another new distillery,” he says, “as Fettercairn has previously really not had that much exposure. It’s a hidden gem.”

The choice of 12 and 28 Year Old bottlings for the new Fettercairn range might seem slightly strange, but Lennie points out that “Fettercairn has always been used a lot for blending, and it happens that we have a lack of stock between those two ages. However, we are bringing out a 16 Year Old that had been distilled using chocolate malt and finished in a mix of sherry and port casks, plus a 23 Year Old travel retail exclusive and some limited releases this year. We have a treasure trove of old stock, with the oldest cask having been filled in 1962. In total, we have some 30,000 casks maturing in 14 warehouses at the distillery.

“The 12 Year Old is a great introduction to the brand and makes a really refreshing highball. Both that and the 28 Year Old reflect the new-make character – fresh and vibrant, with tropical fruits, while there’s Turkish Delight and something slightly savoury in the 28.”

Reflecting the “treasure trove of old stock” noted by Lennie, just 818 bottles of 40 Year Old – distilled on 23rd December 1977 – have been released, after spending 35 years in Bourbon casks, then five years in Apostoles sherry casks. There are a mere 234 bottles of the 50 Year Old – distilled on 11th June 1966 – which was matured for 45 years in a Bourbon cask, before spending a final five years in a port pipe. 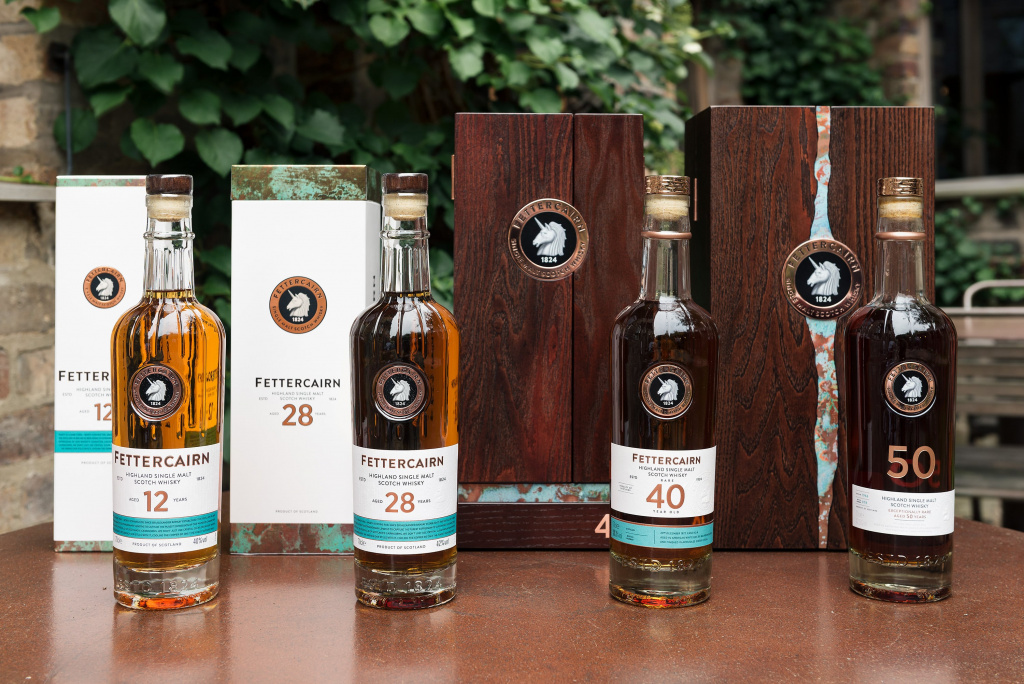 While the distillery previously produced an amount of peated spirit each year, principally for blending purposes, no peated malt has been used for the past seven years. The peated Fior was previously one of the brand’s two principal products, however distillery manager Stewart Walker says that “I don’t think Fettercairn is associated with peat, it’s not really what it’s about. We’re concentrating now on the distillery character.”

That character is influenced by a feature unique to Fettercairn; namely the presence of ‘cooling rings’ on the spirit stills. As Walker explains “The cooling ring pours cold spring water onto the head of the still, and it creates reflux. The light, floral notes pass over, while the heavier molecules fall back at the change of temperature. Effectively, it gives you more copper contact.

“Alistair Menzies was the manager in the early 1950s, and he was looking for a lighter, more floral note in the whisky. He designed the cooling rings to get that effect. I imagine he experimented by having guys with hosepipes pouring water onto the stills and noting what the spirit nosed and tasted like from those distillations. Then he had the distillery engineer attach a copper ring around the still with holes drilled in it, allowing water to pass down. The original from 1952 is still in use on No.1 spirit still today, and a copy was fitted to No.2 spirit still when the distillery was doubled in capacity during 1965/66 with the introduction of a second pair of stills.”

Not surprisingly, given their uniqueness, the cooling rings feature heavily in promotional material relating to the current Fettercairn range, and the spirit stills are not lacquered and gleaming, but proudly bear the stains of water contact, which creates an attractive patina on the copper. Even the presentation alludes to the cooling rings, with the bottle design having a ‘ring’ bulge on the neck and a representation of the effect of water running down the glass. It also boasts the unicorn crest of the Ramsay clan, which is prominently displayed at the distillery itself.

Along with the cooling rings, another feature affecting the character of Fettercairn single malt is an increase in fermentation times, which came about as a result of a major 2015 distillery upgrade programme. During this, a new tun room was created, allowing for the existing eight Oregon pine washbacks to be supplemented by three more. The extra capacity allowed fermentation times to be lengthened from the previous 48 hours – actually, the minimum viable time – to 56 hours, with the option of 60 hours if desired.

Stewart Walker explains the positive effect this development has had. “We’re getting more consistent spirit than previously,” he says. “Working with 56-hour fermentations means you don’t get the unfermented sugars that might otherwise stick to the heating coils in the still, meaning it takes longer to heat the wash at times.”

Spirit character has also been influenced in recent years by the replacement in 2009 of stainless-steel condensers on the stills, fitted some 14 years earlier, by more conventional copper-based ones. The effect of introducing, or reintroducing, more copper into the system in this way has been to lighten and sweeten the new-make spirit. 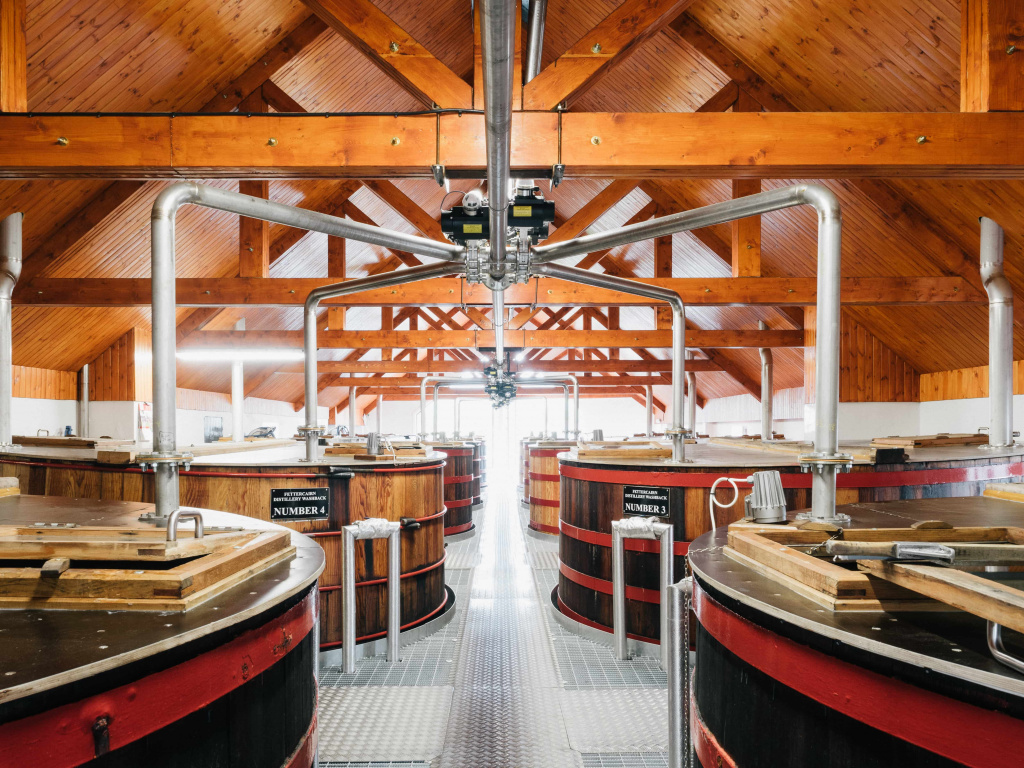 The spirit begins its life in Fettercairn’s ‘old-school’ cast iron mash tun, which came second-hand from Glenugie distillery at Peterhead when it closed in the 1980s. A copper canopy was added, and it was lined with stainless steel for easier cleaning. Twenty-four mashes are processed each week, and the distillery has a theoretical capacity of 2.2mla, though at present annual output stands at 1.5mla. 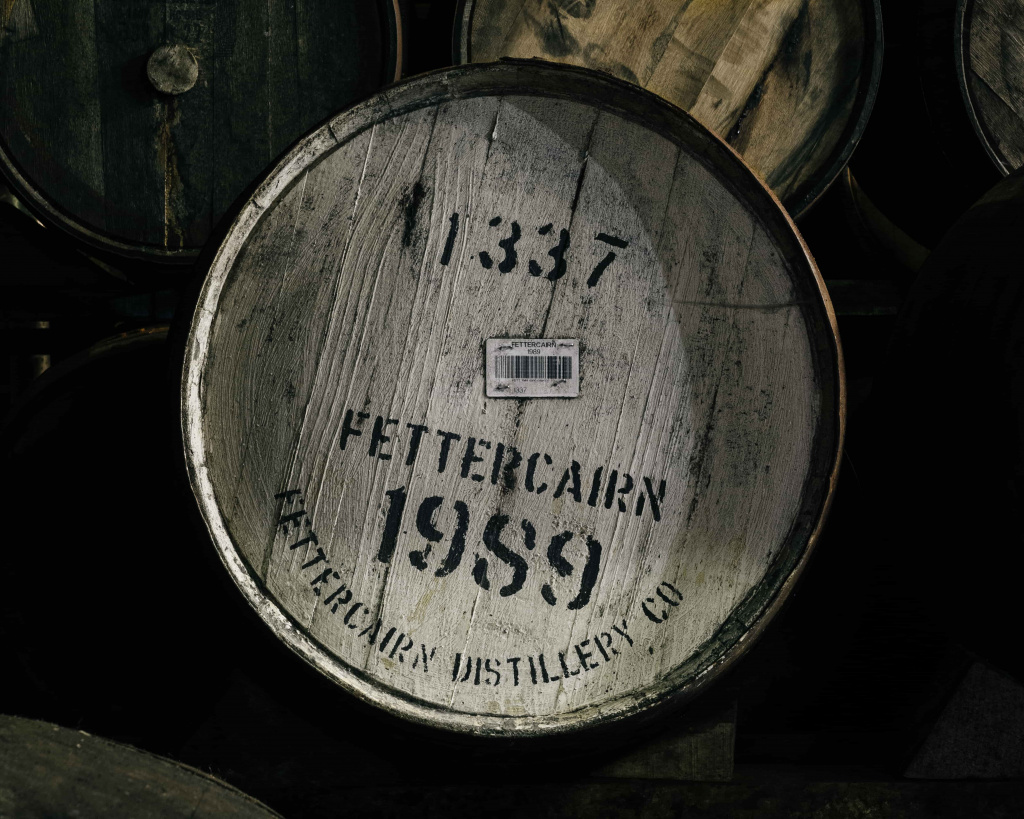 When it comes to maturation, Stewart Walker explains that “The bulk of the new-make goes into first-fill bourbon casks, but we’re also looking at putting it into different casks from the start and finishing it in a variety of casks. There’s lots of experimentation going on under Greg Glass [Blender and Whisky Maker at Whyte & Mackay], who is a very innovative guy. The importance of wood is massive for Greg, and he’s having a lot of influence on what we’re doing at Fettercairn.”

He adds that “The company saw a real gap in its single malts portfolio with Fettercairn. We’re sitting on a variety of old whiskies. Each brand has its own unique character and style, and of course their own story. With Dalmore the story is principally about wood, and with Fettercairn it’s about production. Fettercairn is a premium whisky that sits between the Dalmore and Jura ranges.”

The distillery attracts around 5,000 visitors each year, and in 2020 there will be an as yet undisclosed distillery-exclusive bottling to reward those making the trip to Fettercairn, while the distillery also sells the travel retail exclusive 12 Year Old expression, finished for 12 to 24 months in a Pedro Ximénez sherry cask. Additionally, there are outline plans to convert the old Customs & Excise office that remains in one of the warehouses into a bottle-your-own venue.”

Stewart Walker declares that “You can do so much with Fettercairn, it’s an extremely versatile whisky, and these are very exciting times for the distillery and the brand.” 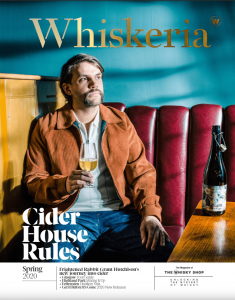 The original feature is our cover story in the Spring 2020 edition of Whiskeria, delivered to the door of W Club subscribers and also free with any Whisky Shop purchase in store or online. Learn more here.