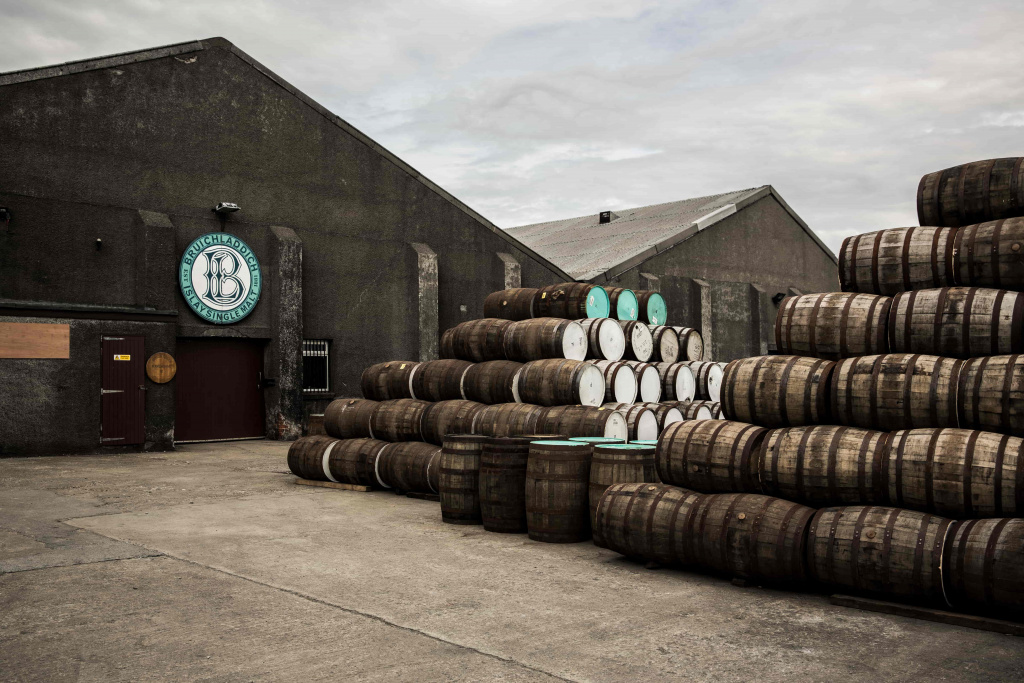 We tend to associate the great, late Victorian Scotch whisky ‘boom’ period of distillery construction primarily with the Speyside region, but in reality, all of Scotland benefitted, including the Hebridean island of Islay. There Bunnahabhain and Bruichladdich distilleries were established in 1881, with the latter being designed by 23-year-old engineer Robert Harvey and constructed for the Glasgow-based Harvey family of distillers. Both plants were intended to supply peaty, strongly-flavoured malt for blending purposes.

Unlike many of its fellow Islay distillers, Bruichladdich was a ‘courtyard’ distillery, built using the recently-patented modern concrete, rather than an extension of an existing agricultural enterprise. It was equipped with tall, narrow-necked stills to produce a relatively pure, elegant style of spirit.

When the indefatigable distillery chronicler Alfred Barnard visited Bruichladdich just a handful of years after its opening, he wrote that “The Distillery, which is two miles from Port Charlotte and six from Bridgend… covers a little over two and a half acres of ground, and faces the sea. It is a solid, handsome structure, in the form of a square, and entered through an archway…”

The Harvey family owned and ran Bruichladdich until 1938, when it was sold to Train & McIntyre, though it was silent from 1929 until 1936. Thirty years after the Harveys relinquished ownership, Invergordon Distillers acquired Bruichladdich, going on to double the number of stills to four during 1975.

When Whyte & Mackay Ltd took over Invergordon Distillers in 1993, Bruichladdich was closed as surplus to requirements, remaining almost entirely silent until December 2000. At that point, the characterful single malts of Islay were just beginning to receive wider public recognition, and in 1997 Ardbeg distillery had been rescued from likely oblivion by Glenmorangie plc, and the future for Bruichladdich also began to look brighter when a company, headed by Mark Reynier of independent bottler Murray McDavid, bought the distillery at a cost of £6.5 million. 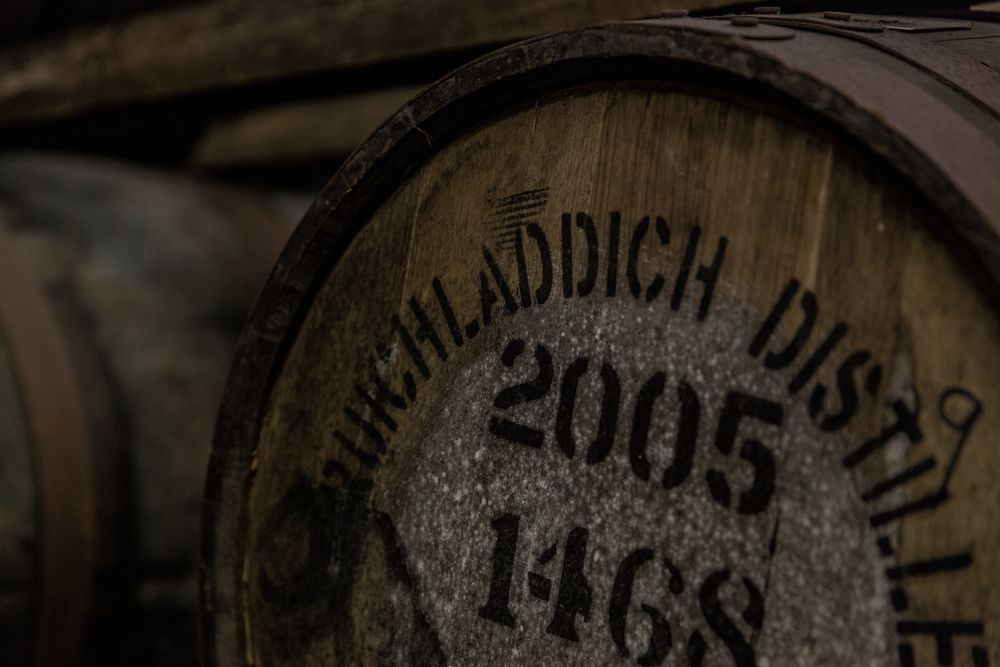 What Reynier and his team, including the highly-experienced Islay distiller Jim McEwan, took on was effectively an un-reconstituted Victorian distillery. It came complete with original, open-topped, cast iron mash tun and wooden washbacks, while one of the two wash stills in situ, now renovated, dates from the distillery’s establishment, and is reputedly the oldest in Scotland.

The first distillation under the Reynier regime took place in May 2001, and comprised heavily peated spirit, given the name Port Charlotte; in October of the following year the world’s most heavily peated single malt (80ppm) was distilled, subsequently being called Octomore, after one of Islay’s many long-lost farm-based distilleries.

Along with unpeated Bruichladdich, Port Charlotte and Octomore ultimately became the distillery’s core bottlings, with Scottish Barley and Islay Barley being the principal expressions of each. Around 40 per cent of all barley used by the distillery is now grown on the island, and the possibility of reinstating floor malting at Bruichladdich has been discussed.

Mark Reynier set out to gain attention for Bruichladdich by adopting a somewhat ‘out there’ approach in what was still a relatively conservative industry. When the distillery was spied upon via its webcams by the US Defence Threat Reduction Agency – tasked with hunting for weapons of mass destruction – Reynier eagerly seized on the story, which was soon being relayed around the globe, doing no harm to Bruichladdich sales in the process.

One milestone for Mark Reynier and his associates was the release in 2011 of The Laddie Ten, made up entirely of whisky distilled since the distillery’s reopening. However, as Content Creation Manager Carl Reavey explains, “It was a huge success, in fact, it was almost too well-received, and ultimately had to be withdrawn, due to lack of aged stocks.

“Post-2001 reopening we had a big gap in our stock profile from when the distillery had been closed, so we needed to be creative with stock in order to survive. We did some quite radical wine finishes, and things like Rock (finished in red wine casks), Waves (youthful and lightly peated), and Peat (peated to 35ppm).  We were offering no-age-statement (NAS) whiskies before the expression NAS was even in use. Then, over time, the stock profile of the whole Scotch whisky industry came under strain, due to the global success of Scotch. NAS came to the fore, and we were (unintentionally) ahead of the game.”

A public perception that NAS whiskies were inferior to those carrying age statements, and comprised significant amounts of relatively youthful spirit, began to develop, and, as Carl Reavey says, “We didn’t want to get tarred with the same brush as everyone else, so we opted for the ‘transparency’ route. You could say it’s helped give the category greater respectability.”

The ’transparency’ in question relates to The Classic Laddie, a core NAS expression – or ‘multi-vintage cuvee,’ in the words of the distillers. From April of last year, each bottle has been marked with a batch code, and entering the code at the distillery website reveals details of all component cask types and ages. According to the distillers, “Every vatting of The Classic Laddie has been created using a different suite of casks, and therefore every batch code will give different results. We celebrate natural whisky and variety.” 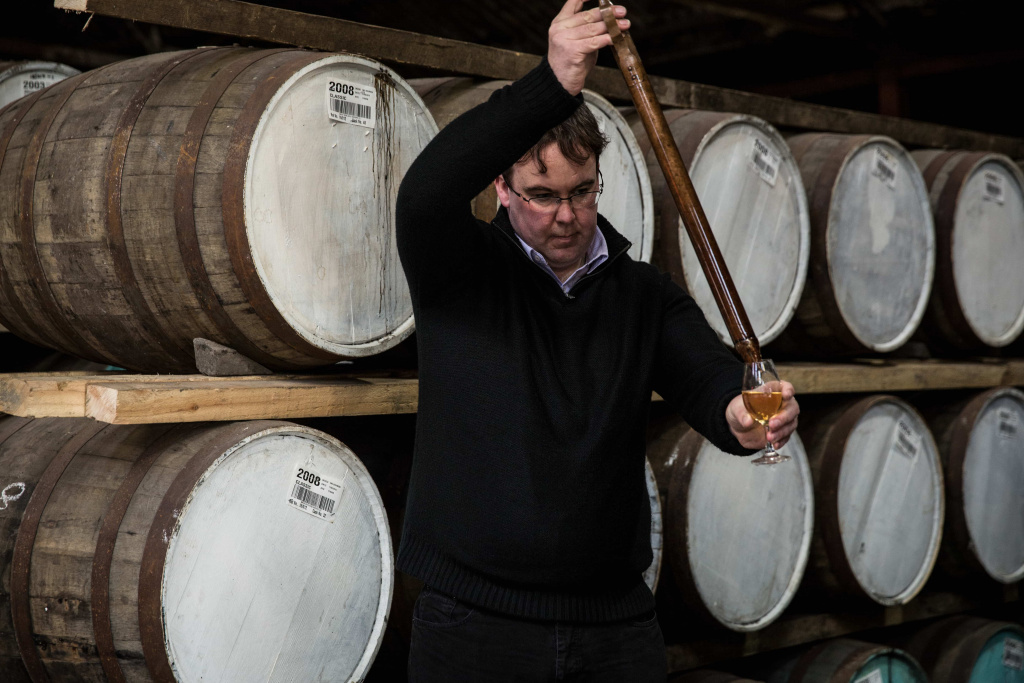 Following the overwhelmingly positive response to the Classic Laddie innovation, the Laddie team decided to apply the same principal to the other core NAS bottling in the range, Port Charlotte Scottish Barley. As Reavey notes, “That is our only other multi-vintage cuvee. There is a misconception that Bruichladdich offers many NAS expressions, but the vast majority of what we do either has an age statement or a year of distillation on it.”

Mark Reynier and his team achieved extraordinary success by positioning Bruichladdich outside the single malt mainstream, and by releasing an, at times, bewildering array of releases – no fewer than 432 between 2001 and 2012! By the latter date, however, it had become apparent that in order to make a step change in Bruichladdich’s overall operation, external investment was required, and in 2012 the distillery was acquired by French drinks company Remy Cointreau for £58 million.

Pessimists predicted that Bruichladdich would become risk-averse in the hands of a large corporate owner, and would lose its vital individuality but, in truth, Remy Cointreau has provided much needed finance to improve the existing venture without sacrificing everything that makes Bruichladdich special. The ancient cast iron mash tun was refurbished – rather than replaced with a more efficient new version, a second bottling line was installed, and new warehouses built.

Along with the change of ownership, which saw Mark Reynier cross the Irish Sea to set up a new distillery in the port of Waterford, another major alteration to the Bruichladdich status quo came with the succession of Adam Hannett to the role of Head Distiller.

Islay born and bred, like his predecessor Jim McEwan, Hannett started work at Bruichladdich in 2004, going on to understudy McEwan in his roles of Production Director and Master Distiller, taking on the top job when his mentor retired in the summer of 2015, after 52 years in the Scotch whisky business.

“I call myself Head Distiller, certainly not Master Distiller, as Jim was,” declares Hannett. “Maybe one day, but I definitely wouldn’t be comfortable with it now. Every day working with Jim was amazing. There were no short cuts and it was all about quality and achieving the very best possible. None of our whisky goes into blends; it’s all bottled as single malt, so it has to be right. Integrity is vitally important.” 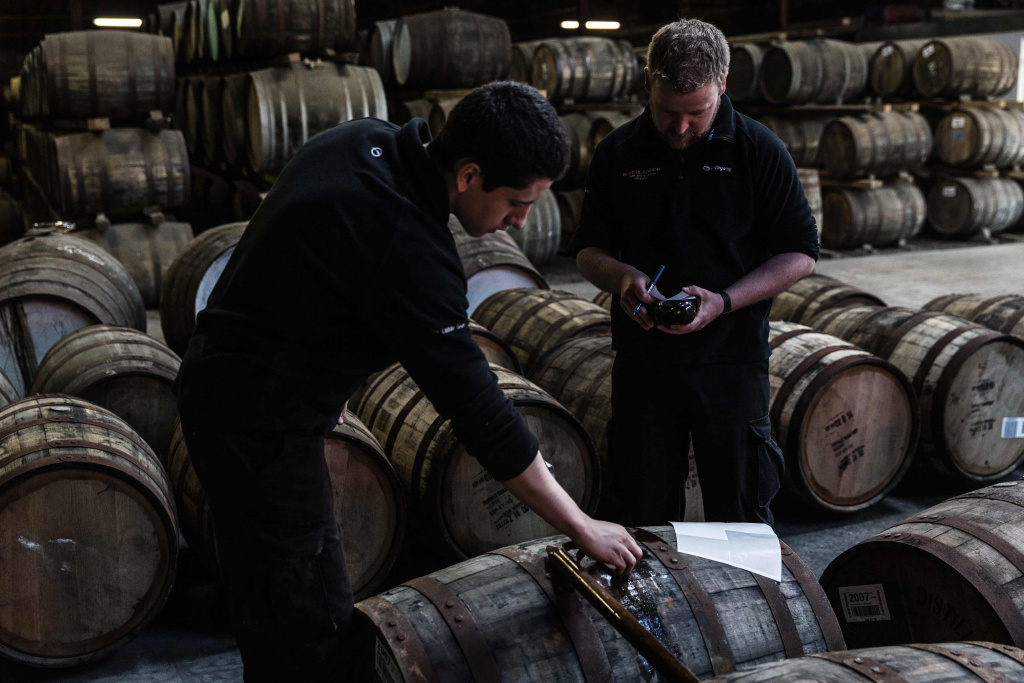 Adam Hannett has pioneered an innovation in the shape of the ‘MP Programme,’ with MP standing for ‘Multi-provenance.’ As Carl Reavey explains, “Every three or four months Adam selects three casks and we package them as a sampling kit of three x 200ml bottles. We do run of 750-900 bottles, and the kits sell for £50 each.

“We then have a collective opening and live You Tube sampling with Adam on a given day. It’s going on all over the world, and among others, we’ve done three Port Charlottes and three Octomores. It underlines our core values – that every cask is different. It comes back to the issue of transparency. Classic Laddie and Port Charlotte Scottish Barley vary from batch to batch, and we like it that way.”

18,000 bottles of each were released on a global basis, with The Whisky Shop rapidly selling out its allocation, so congratulations if you happen to have a bottle at home! According to Carl Reavey, “There will be more 10-year-old releases in future, but not necessarily a ‘Troika.’ When Adam took over he found that by then a limited amount of liquid of the right age had become available, hence the ‘Troika’ bottlings. They were driven purely by liquid availability.”

Bruichladdich is, and always will be, synonymous with single malt whisky, but the distillery has also made a major impression with its increasingly popular Botanist Gin, available from The Whisky Shop. It is a dry gin, containing no fewer than 22 foraged island botanicals, and is produced in the last fully functioning Lomond still in Scotland, rescued from Inverleven distillery at Dumbarton in 2004, prior to its demolition. The less than aesthetically pleasing still has been christened ‘Ugly Betty.’

“It started out with high-end cocktails and chefs, but its appeal has spread,” says Carl Reavey, “In the fiscal year 2016/17 we sold some 750,000 bottles of Botanist. In terms of volume, though not value, we sold more gin than whisky!

Indeed, sales of whisky have increased dramatically under the Remy Cointreau regime, and the amount of money invested confirms that the French firm is in this for the long term. Best of all, for Bruichladdich’s legions of fans around the world, as Carl Reavey declares, “What Remy bought was access to the Bruichladdich ethos. It is our ethos that interests them most. As a result, they are not trying to change us. They are urging us on.”