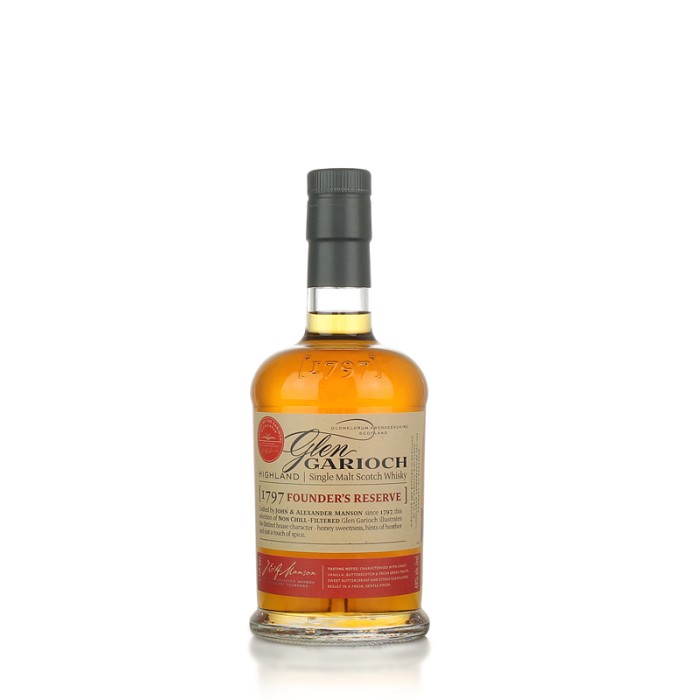 The quintessential Glen Garioch, the Founder's Reserve celebrates the Manson brothers who first established the distillery and the 200 plus years of craftsmanship that goes into every bottle that bears the Manson name. The spirit, with its robust yet smooth, velvety texture and fruity, vanilla notes, is well worth experiencing. Like the 12 year old, the non chill filtered Founder's Reserve is the perfect accompaniment to hard cheese.

The Glen Garioch distillery, which originally incorporated a brewery as well, stands on the very edge of the town, with a narrow lane connecting it to the main road between Aberdeen and Banff. The Manson brothers who founded it came from farming stock, and were respected members of the local community. Other members of the family were merchants and tanners, and an uncle had been a vintner in Oldmeldrum. In 1837, the year before co-founder John Manson died, they were joined by his son, also named John Manson (1804-1877). He took over the business, and as well as operating the distillery, opened a snuff mill, maintained the family's interest in tanning and acquired farms in the neighbourhood. He finished life as a landowner, with the proud title 'Laird of Fingask', derived from his main farm, and married Elizabeth Blaikie, a cousin of the explorer, David Livingstone.