With almost 200 years of history, Johnnie Walker is synonymous with whisky. Visit almost any bar in the world and you can be sure to see the striding man on at least one of the whiskies on the shelf. From humble beginnings in a Kilmarnock grocer, Johnnie Walker has built a loyal following and impeccable reputation based on the quality of the liquid. Perhaps surprisingly for the namesake of the world’s best-selling Scotch whisky, the eponymous Johnnie Walker was teetotal. So just how did a non-drinker become an icon of whisky? 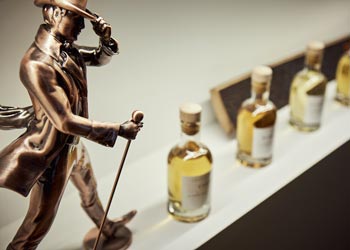 When a 14-year-old John Walker’s father died in 1819, the family farm was sold and the princely sum of £417 was invested in a grocery, wine and spirits shop on Kilmarnock High Street. Young John managed the shop and, following the Excise Act of 1823 and the growing popularity of whisky, was soon dealing mainly in the amber nectar. Building on his experience in blending tea, John began blending malt whisky. While blending malt and grain whiskies together was still illegal, John sold his own made-to-order blended malts, eventually labelling his own blend as Walker’s Kilmarnock Whisky.

When John died aged 52, in 1857, his son Alexander ‘Alec’ Walker took over the family business. The iconic square bottle was introduced by Alec in 1860, allowing more bottles to be packed into a smaller space and reducing breakages, while Johnnie Walker’s other iconic feature – the sloping label – was also introduced this year, allowing more text to fit on the label and helping customers identify the bottles from a distance. Such innovations strengthened the business and lead to the introduction of the first Johnnie Walker blend in 1865, named Old Highland Whisky. By the time Alec passed the business to his own sons, whisky had grown from just 8% of sales to more than 90%. 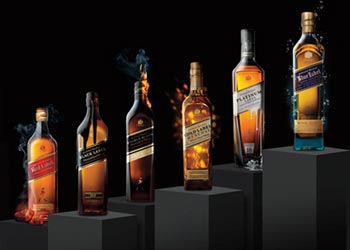 While White Label was discontinued during the First World War, little else has changed in the years since. The company joined the Distillers Company in 1925, eventually merging with Guinness and undergoing subsequent mergers to become Diageo in 1997. The range of blends has seen more recent additions, including Double Black Label, Gold Label Reserve, Green Label, Platinum Label (now Johnnie Walker 18 Year Old) and the most premium blend, Blue Label, with each colour serving a different purpose and occasion. The strategy has proved popular with whisky lovers, resulting in sales of more than 150 million litres per year.

Just this month, Diageo has revealed an investment of £150 million in a new state-of-the-art Johnnie Walker tourist attraction in Edinburgh alongside upgrades to its constituent distilleries’ visitor centres. The attraction will include several floors of interactive whisky exhibits including a number of multi-sensorial rooms dedicated to the key single malts in the Johnnie Walker blends. As the brand approaches its 200th anniversary, there is little doubt that the Striding Man will be able to Keep Walking.