Making Waves in the Glen of Tranquillity

Founded in 1843, Glenmorangie is one of the Highlands’ most distinguished single malt whiskies. The name, oft mispronounced as Glenmor-AN-gie instead of Glen-MOR-angie (rhyming with orange-y), is said to be derived from the Scots Gaelic for ‘Vale of Tranquillity’ and to see the distillery it is clear how the moniker was acquired. Situated on the banks of the Dornoch Firth in Ross-shire, the distillery began life as Morangie Farm, latterly home to a brewery before Andrew Matheson, a former distillery manager, bought the farm and converted the Morangie brewery to a distillery, duly Christened Glenmorangie. Using two second-hand gin stills, Andrew set out to produce his single malt. 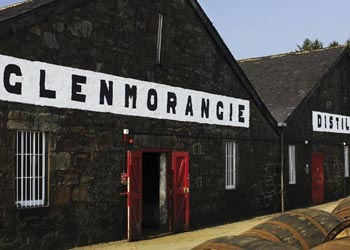 From second hand gin stills to Scotland’s tallest whisky stills – the distillery has come a long way in the past 175 years. Today, Glenmorangie is the best-selling single malt in Scotland, with around 10 million bottles produced every year. The core range includes a 10-year-old, matured in first and second fill American White Oak casks sourced from the Ozark mountains of Missouri, and three extra-matured expressions, which begin life as The Original does, before undergoing a further two years finishing in hand-selected ex-wine casks. 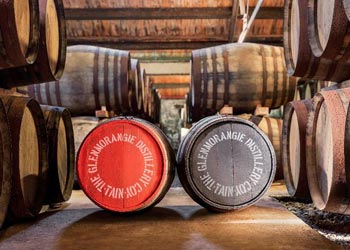 This wood finish range was developed by Dr Bill Lumsden, Director of Distilling, Whisky Creation & Whisky Stocks, to bring new depths of flavour to the signature spirit. The Quinta Ruban takes its name from the Gaelic for Ruby, after the Ruby port pipes from the ‘Quintas’ wine estates of Portugal that imbue a balance of sweet and dry flavours, Turkish delight, sweet orange and dark chocolate. The Lasanta, meaning warmth and passion in Gaelic, is matured in Oloroso and Pedro Ximenez sherry casks from Jerez in Spain, bringing sultanas, walnuts, butterscotch and hazelnut. Finally, the Nectar D’Or takes its name from the Gaelic and French for gold, and is finished in Sauternes wine casks from France, imparting ginger, lemon meringue, nutmeg and dates, as well as the rich golden colour for which it is named.

The latest addition to the distillery’s Prestige expressions is the second release in the Bond House No.1 Collection, Grand Vintage Malt 1989. Created from some of the last spirit to be distilled in the former still house, this expression is a marriage of some of the most exceptional whiskies in the vintage, matured for more than 27 years and finished in ex-Côte-Rôtie wine casks from France. The result is a syrupy, rich whisky with baked apple, buttery fudge and gentle citrus notes, and a long and powerful finish. 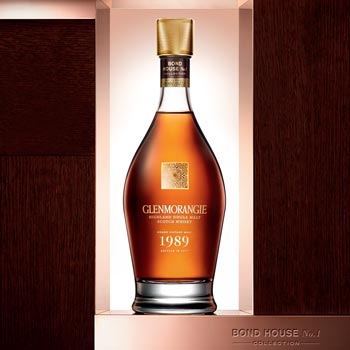