With exciting announcements on the horizon for The GlenDronach and The BenRiach, we look back on Gavin Smith's interview for Whiskeria with the three distilleries' then-newly appointed Whisky Maker, Rachel Barrie, back in Autumn 2017. 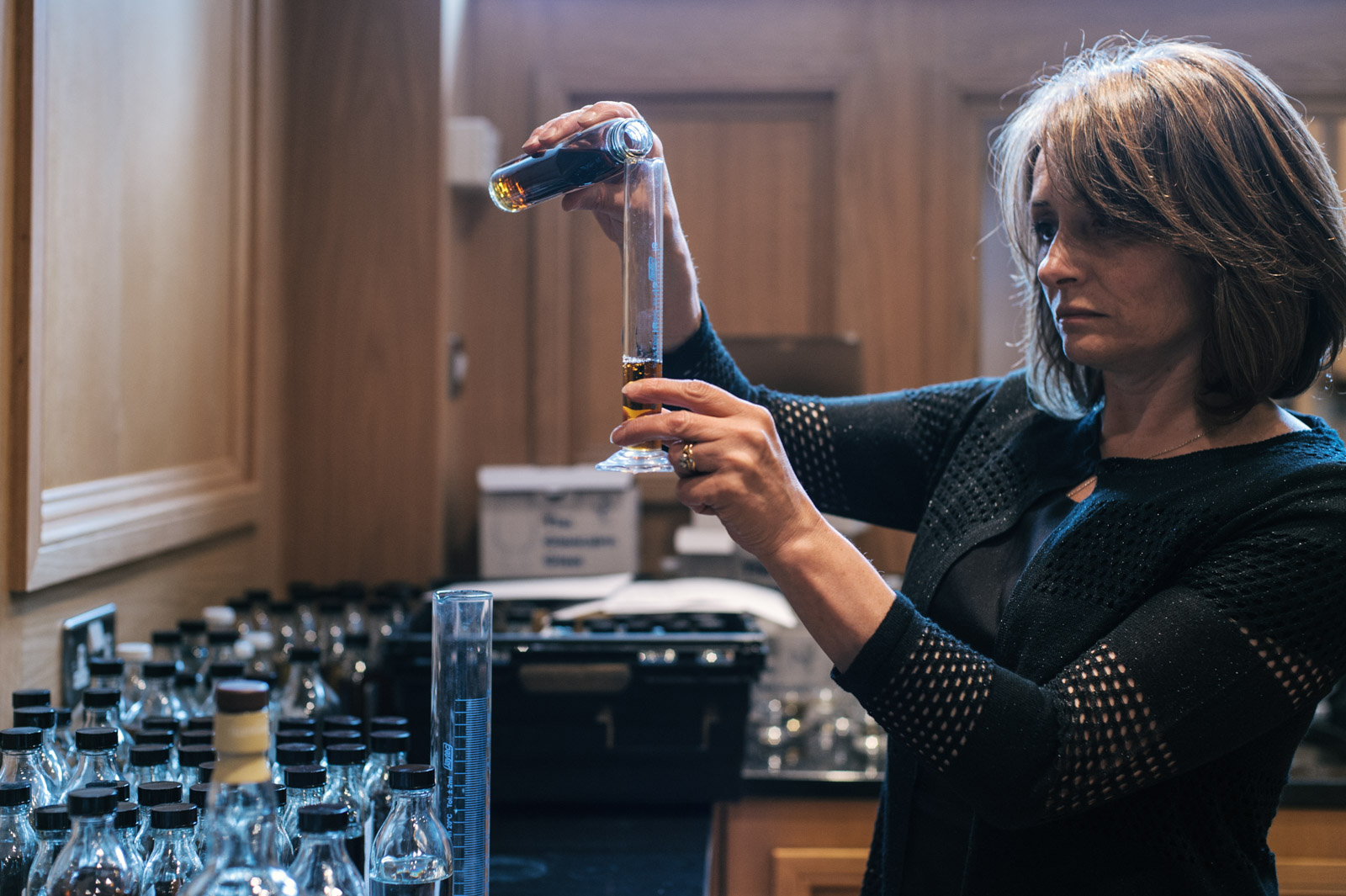 Since 2016, the trio of The BenRiach, The GlenDronach and Glenglassaugh Scottish distilleries have been owned by the Kentucky-based Brown-Forman Corporation, best known around the world for its Jack Daniel’s Tennessee Whiskey and Woodford Reserve Bourbon brands.

Brown-Forman is relatively new to the world of Scotch, but earlier this year it recruited the highly experienced Whisky Maker Rachel Barrie, formerly of the Glenmorangie Company and Morrison Bowmore Distillers.

Rachel has been in the Scotch whisky industry for 26 years and, given her down-to-earth background in an Aberdeenshire farming family, she has decided to avoid the sort of pretentious job titles favoured by some of her competitors. “I started work with BenRiach on 1st March,” she says, “and I’m the ‘Whisky Maker’.”

She explains that, “I’m involved in everything from spirit quality to distillery production planning. I work on the wood policy for new-make spirit, and re-racking of existing spirit into other casks where necessary.

“A big part of my job concerns the recipes of our single malts, and I work very closely with our Commercial Director, styling and shaping the portfolio. I also have to be very analytical, and do lots of number-crunching. For me, it’s about unlocking the true character of each distillery, looking at everything from geology and atmosphere, to how it’s come to be what it is today.” 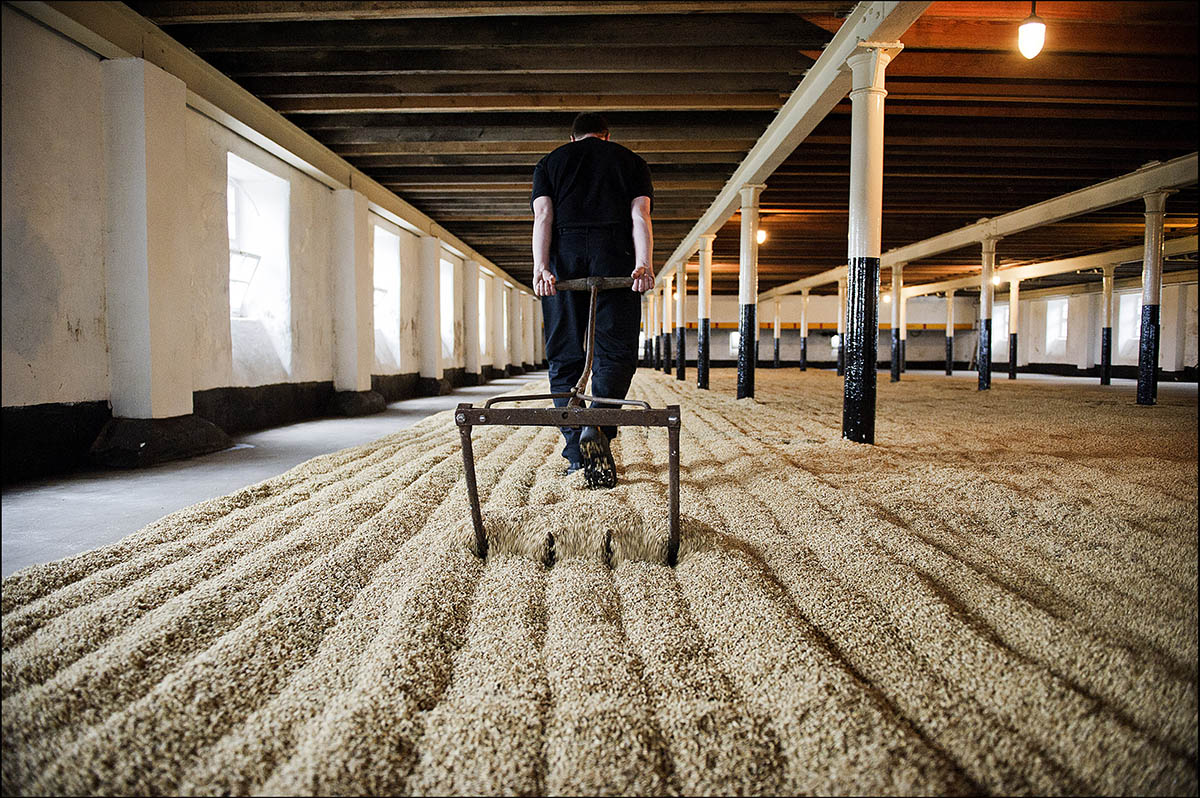 The BenRiach distillery is located some four miles south of Elgin in the Speyside region and was built by John Duff & Company during 1898, though it only operated for three distilling seasons before falling victim to the downturn in whisky production that occurred at the turn of the century.

Remarkably, BenRiach remained silent until 1965, when it was substantially rebuilt by The Glenivet Distillers Ltd. A second pair of stills was added in 1985, but the distillery was mothballed in 2002. Its floor maltings had been used until just two years’ previously, and were subsequently reinstated in 2012.

Under their regime, BenRiach – as it was now called – issued a plethora of expressions, both permanent and limited, and the single malt brand was soon firmly established. Both peated and unpeated variants were released at a wide variety of ages, from the NAS Heart of Speyside, to a 35 Year Old, until the company’s sale to Brown-Forman in 2016.

“BenRiach is not a conventional Speyside distillery,” declares Rachel Barrie. “We have lots of experimentation and diversity within the distillery. For example, we make unpeated, peated and triple-distilled spirit, we seasonally use the floor maltings, and we use lots of different cask types. I’m building on the incredible work done by Billy Walker and his team. BenRiach is believed to be the first peated Speyside malt to have been distilled since the Second World War.

“The distillery is right in the middle between the mountains and the sea – in the ‘sweet spot,’ if you like. Remarkably, BenRiach only has the same rainfall as Barcelona. How unexpected is that! There are lots of underground wells and springs, and the water is very pure, coming from a deep underground reservoir.” 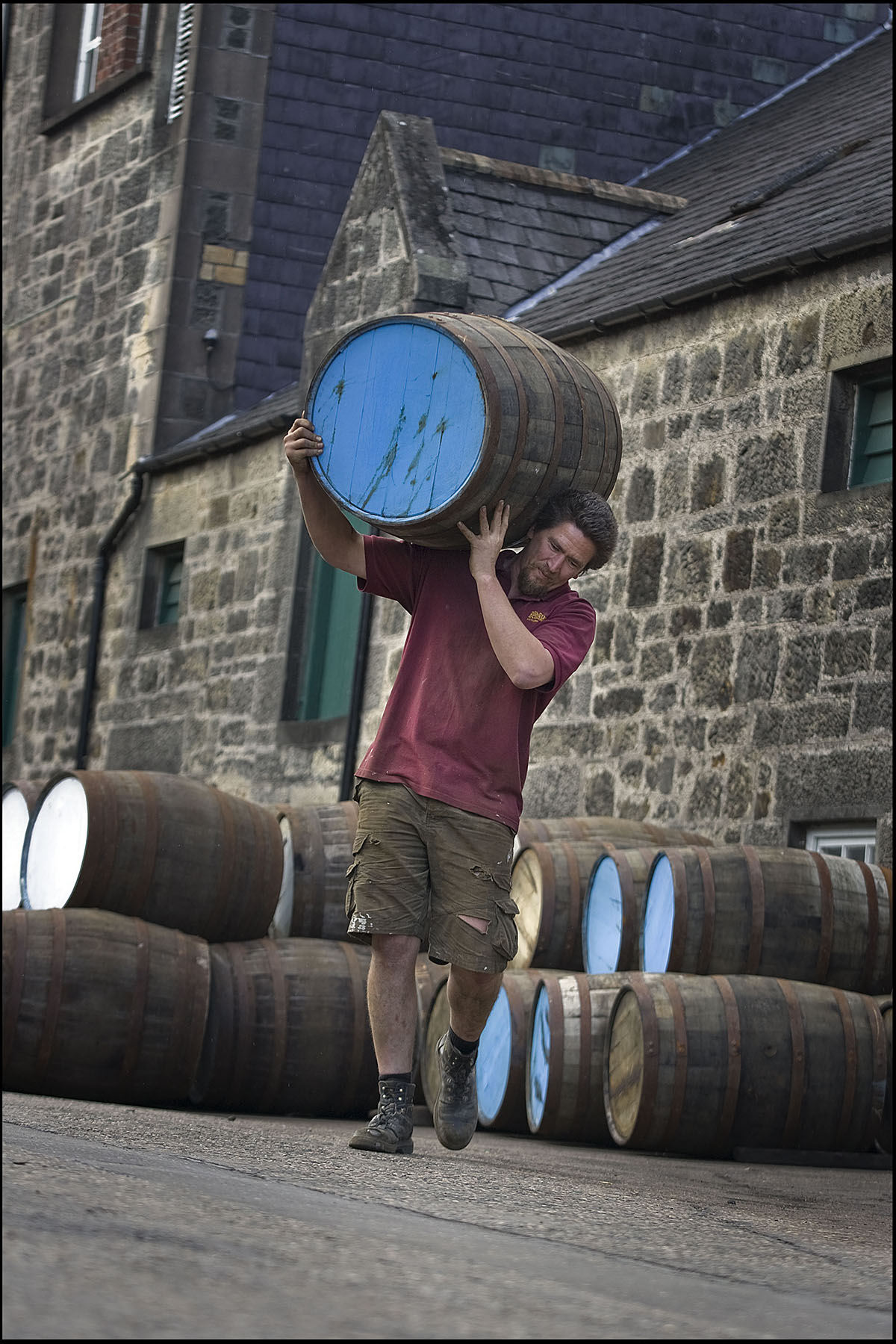 Rachel considers The BenRiach to be “A very accessible malt, which is balanced, fresh and grapefruit-y, grassy, and malty. It’s accessible to new whisky drinkers; the NAS and 10-year-old, in particular, are very versatile and can be mixed well in cocktails. The whisky takes on the character of wood quicker than that from some distilleries. Also, the strength tends to stay higher in the cask. Phonetically, I think the word ‘BenRiach’ is bold and reactive.”

There is currently a new batch of single cask bottlings available – Batch 14 – and they include whisky matured in an eclectic range of casks, including virgin oak and port. “Virgin oak casks work incredibly well with BenRiach spirit,” says Rachel, “as do Marsala and Madeira, while sherry wood brings out the honey and cream in it.”

Peated spirit is made for around one month per year, with an additional week given over to the production of triple-distilled spirit. Since 2012, there have also been short campaigns of whisky-making exclusively using malt produced in the distillery’s floor maltings, and there is clearly potential for a release of that in the future.

Rachel Barrie points out that “we can play tunes with BenRiach, as we have old stock of triple-distilled from the 1990s, and peated going back to the 1970s. Peated BenRiach has more of an ‘inland’ smoked character – reminiscent of a camp fire in a Speyside pine forest. Malts distilled from Islay peat smell of the sea – brine, seaweed and fish oil. The green apple note is dialled up in the triple-distilled version. BenRiach 10 Year Old is our flagship, and I want it to be the best it can be. I want people to be wowed by the flavours in it.” 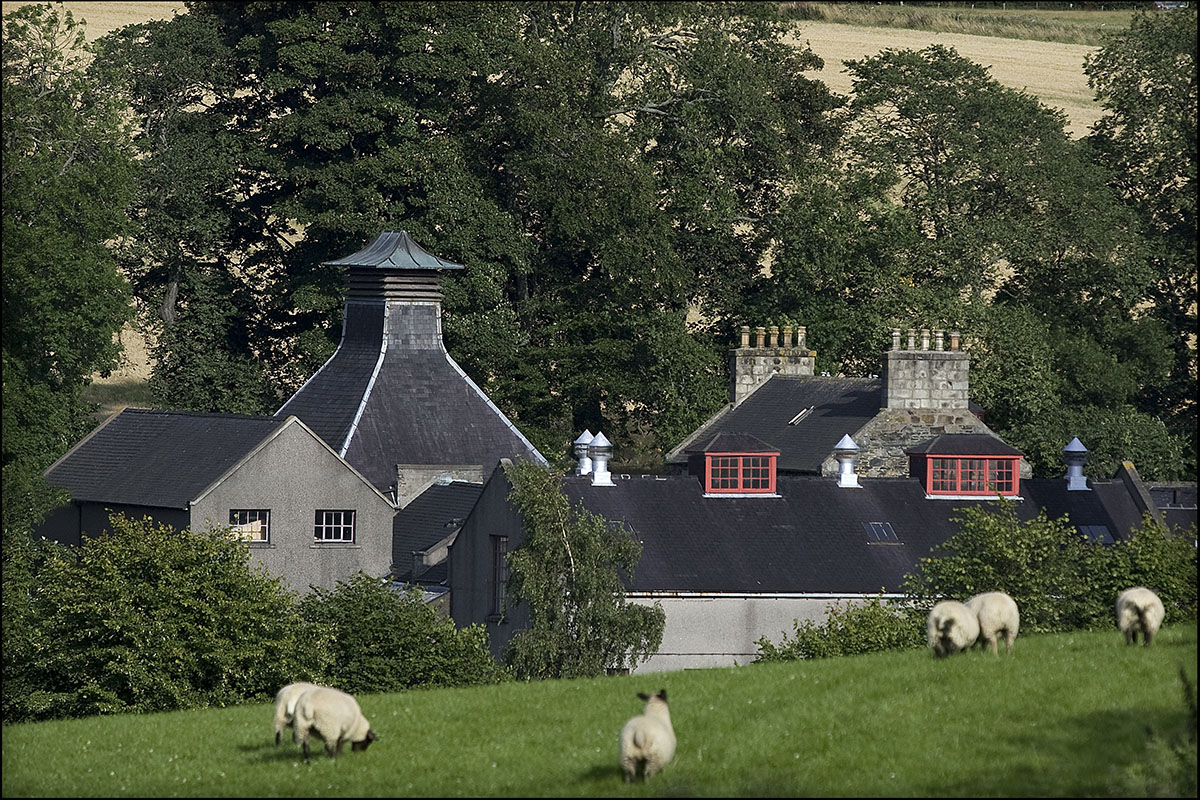 The GlenDronach Distillery is to be found in the valley of the River Forgue, some ten miles from the Aberdeenshire market town of Huntly. It was established in 1826 by a consortium of farmers and local business figures, headed by James Allardice.

Walter Scott – formerly manager of Teaninich, north of Inverness – acquired Glendronach in 1830, and he went on to rebuild the distillery during his period of ownership. In 1920 Captain Charles Grant, fifth son of William Grant, founder of Glenfiddich, paid £9,000 for the distillery.

Then, in 1960, The Glendronach was acquired by the Teacher’s family, and it subsequently became part of Allied Breweries Ltd in 1976, along with the rest of Teacher’s assets. Ultimately, it was then in the ownership of large-scale drinks companies for some 30 years, as Allied Breweries morphed into Allied Domecq, which in turn was taken over by Pernod Ricard subsidiary Chivas Brothers in 2005.

The Glendronach was silent from 1996 to 2002, and the distillery is notable for being the last in Scotland to operate coal-fired stills, though ‘health & safety’ issues precipitated conversion to steam in 2005. Three years later Chivas sold the distillery to the BenRiach Distillery Company Ltd, and one of BenRiach’s first acts was to apply its ‘signature’ spelling regime, re-branding ‘Glendronach’ as The GlenDronach. 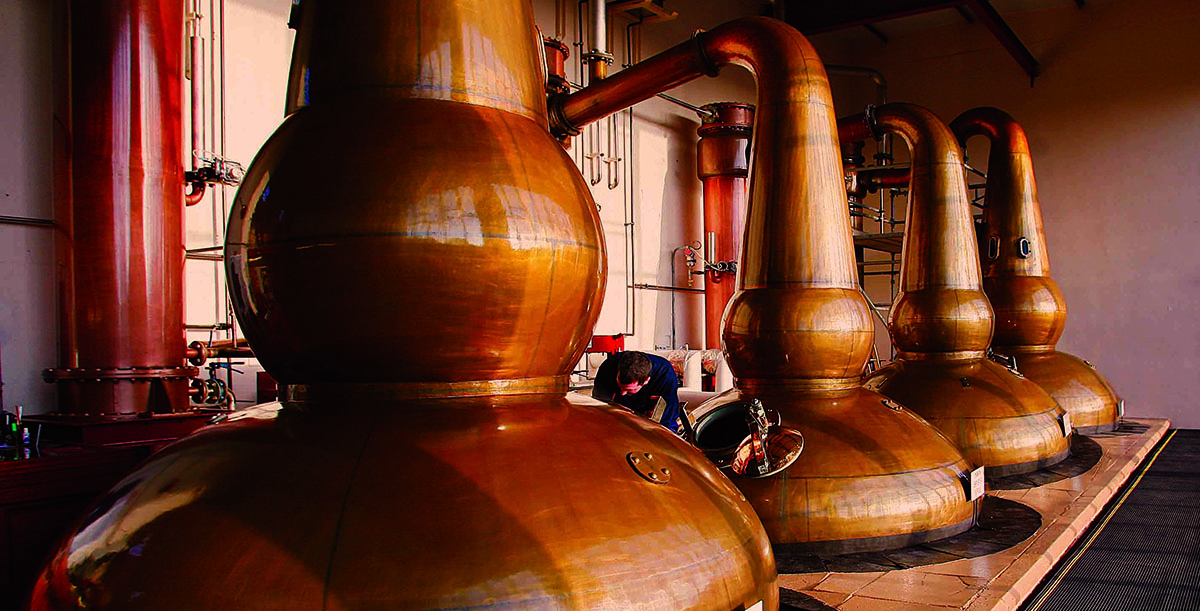 The new owners then set out to restore the reputation of The GlenDronach as one of Scotland’s leading sherry cask-matured single malts, dedicating £3 million to a five-year programme of purchasing ex-sherry casks, and re-racking around 50 per cent of the existing stock into former Oloroso casks.

Today, under Brown-Forman ownership, the core portfolio ranges from the 8-year-old ‘The Hielan’ to the 25-year-old Grandeur, and a peated variant is also available, along with regular releases of single cask bottlings.

According to Rachel Barrie, “The GlenDronach is rich and deep, a real connoisseurs’ whisky which begs to be sipped and savoured in contemplation. The sheer depth of it stands out for me. Phonetically, The GlenDronach sounds mellow, yet deep at the same time. The same as the people of Aberdeenshire!

“The climate is wetter than BenRiach. There are more temperature variations, too. It’s ideal for sherry cask maturation. In summer, the new-make spirit is brambly and ripe, almost vinous in spring, but earthier, with rolling tobacco in winter.” 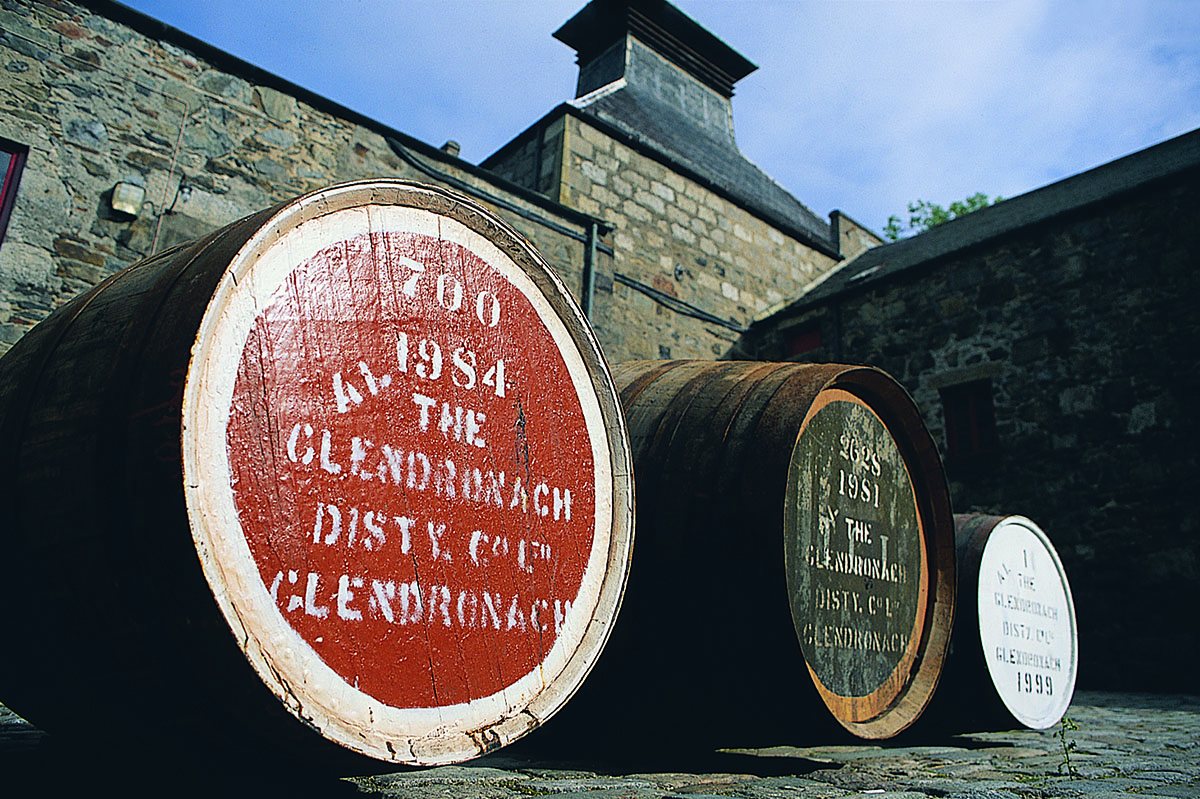 In terms of recent releases from The GlenDronach, Batch 15 of single casks has now hit the shelves. Rachel says that, “these are six whiskies aged between 21 and 27 years and each one is quite different. They give people the opportunity to taste the whisky’s unique character. The next batch will be out in the not-too-distant future.”

Rachel adds: “I’m also working on some expressions that will be older than our current Grandeur 25 Year Old. I’m dedicated to getting the 12 Year Old as perfect as it can be, as it’s the shop window for people to discover The GlenDronach. I’m spending a lot of time on wood management with GlenDronach – trying to ramp up the sherry maturation even further. I want it to be the most richly-sherried single malt on the planet!” 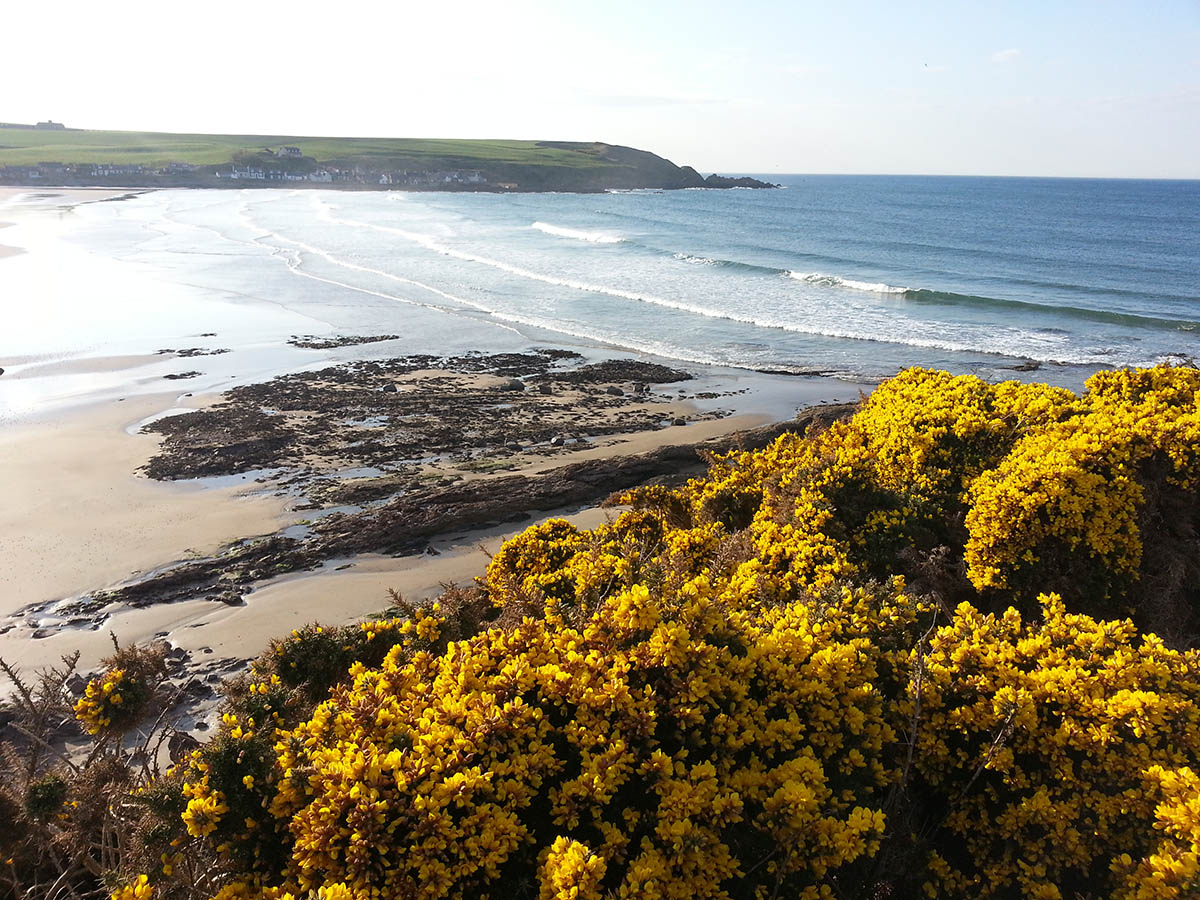 Glenglassaugh stands by Sandend bay on the Moray Firth coast, close to the village of Portsoy. It was built between 1873 and 1875 by Colonel James Moir and the Glenglassaugh Distillery Company at a cost of £10,000, and in 1892 the distillery was sold to Glasgow blenders Robertson & Baxter Ltd. They paid £10,000 For Glenglassaugh – the same as it had cost to construct - and passed it on to their ‘sister’ company Highland Distilleries Ltd, now part of The Edrington Group, for £15,000.

The subsequent history of the distillery, until recent years, was more about silence than activity, being closed from 1908 until 1957, apart from a few years of whisky-making during the 1930s. The present distillery structures date from a reconstruction programme undertaken between 1957 and 1960.

Glenglassaugh then worked until 1986, when it was mothballed once more. Its future prospects seemed less than bright until a number of private investors, operating as The Scaent Group, acquired it from The Edrington Group for £5 million during 2008, and set about bringing it back into commission.

Bottles of new-make spirit were offered for sale to provide a revenue stream, along with a number of highly-regarded variants aged from 21 to 40. The three-year-old ‘Revival’ was launched in 2012, when a visitor centre also opened. 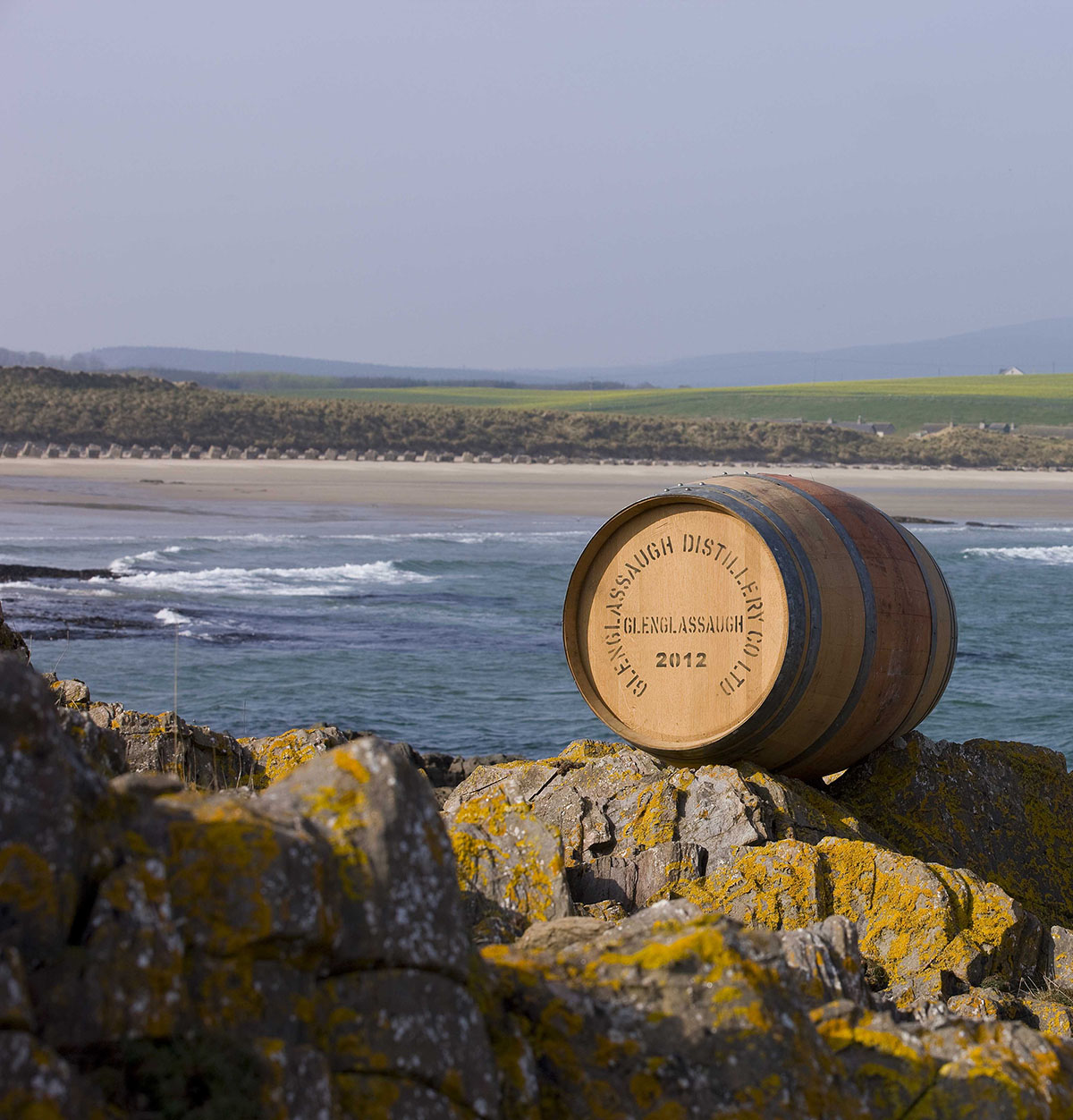 The Scaent Group sold Glenglassaugh to The BenRiach Distillery Company Ltd in 2013, having decided that the venture required more capital to carry it forward. Under the BenRiach regime, ‘Evolution’ and the peated ‘Torfa’ appeared, along with a variety of single cask bottlings and more veteran expressions.

As part of Brown-Forman’s Scotch whisky portfolio, Glenglassaugh brings something different to the party when compared to The BenRiach and The GlenDronach.

“Glenglassaugh is ripe, almost like Saki in a way,” says Rachel Barrie. “It’s almost over-ripe. It’s rich, with tropical and stewed fruits, and the influence of the sea air. I always say it’s ‘shaped by the sea.’ The name ‘Glenglassaugh’ somehow even sounds like the sea to me. No matter what wood it’s matured in, the character of the sea in it can’t be surmounted.

“The water we use at Glenglassaugh has the highest mineral content of that at any distillery in Scotland. This affects the fermentation, because the yeast produces more esters, more pear-drop characteristics, leading to sweet confectionary flavours. The new-make spirit is the sweetest I’ve ever tasted. You get tropical and candied fruits straight off the still. It appeals to a different palate to The GlenDronach, and global opportunities for the brand are huge. The first ever Glenglassaugh wood finishes will be released in October.” 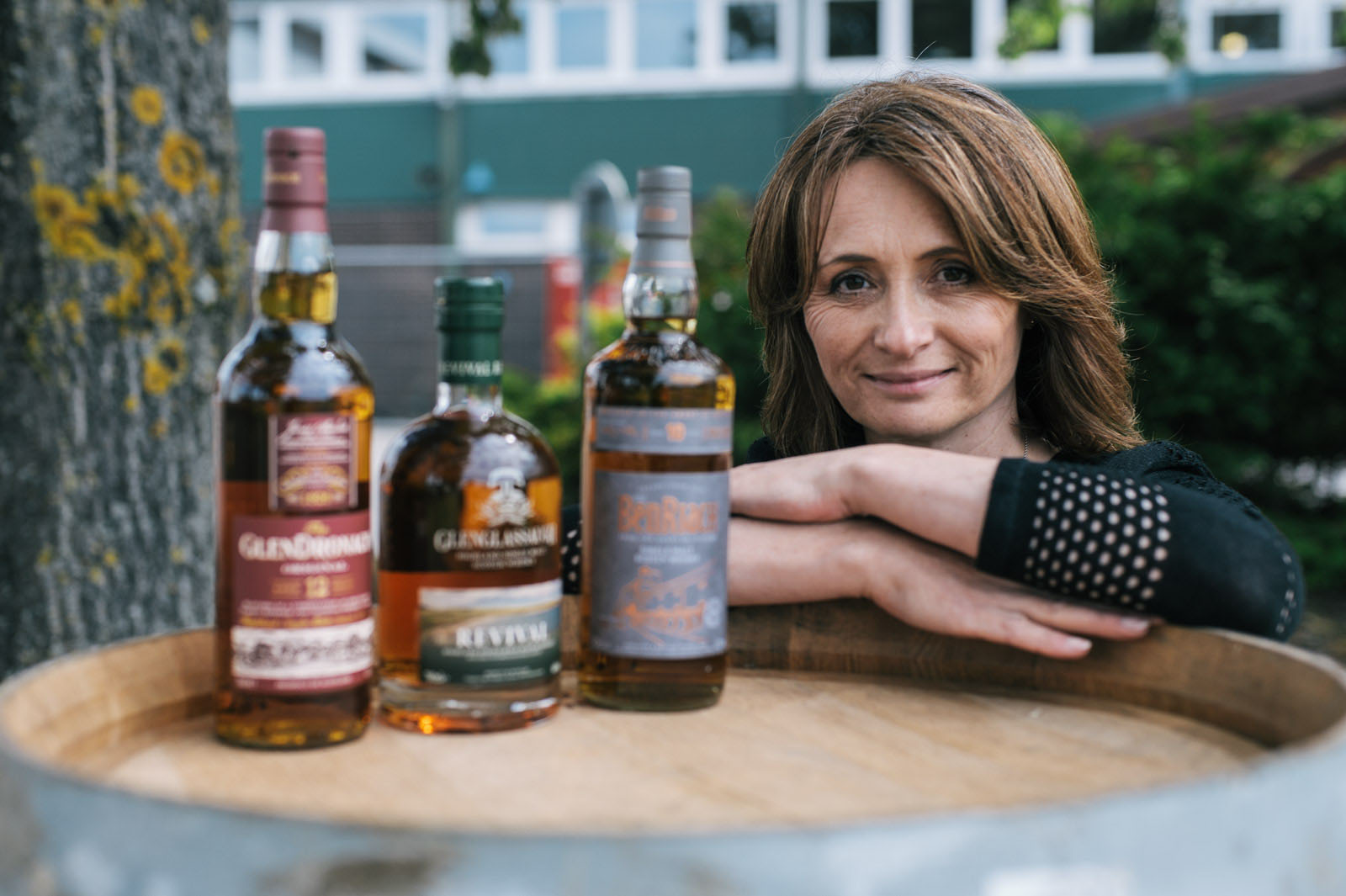 One advantage of Brown-Forman’s ownership of the trio of Scottish distilleries is that the company has its own cooperage in Louisville, Kentucky. “This means, in effect, that we can ‘design’ the casks we want for our Scotch whiskies,” notes Rachel. “We can work with different seasonings and really play tunes with the wood. This gives us great opportunities – especially with BenRiach.”

She explains that “Brown-Forman wants the business to grow, and they have distribution access to around 170 countries, which is obviously great for consumer reach. They have a strong desire to increase sales of the three brands globally.”

In conclusion, Rachel says: “What we have are three very diverse distilleries and single malts in a relatively small geographical area of north-east Scotland. That’s one of the things that’s really stood out for me since I joined the company. It’s a great collaborative culture here. Strong team-working is one of the strengths of Brown Forman, I think. I’ve got a voice which is being heard, and it’s all very inclusive. I’m loving it!”