Spotlight on The Dalmore

The Dalmore is renowned for its smooth Highland single malt whisky, winning awards in competitions and spaces in home drinks cabinets across the world. Each and every bottle bears a 12-pointed silver stag, from the humble 12-year-old to the grandest expression in The Dalmore Constellations range. Seen by many as a mark of quality, the stag’s history actually pre-dates The Dalmore single malt, the distillery, and indeed all records of whisky itself. 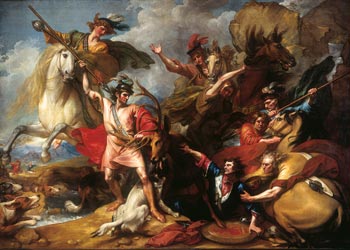 More than two centuries before whisky was first mentioned in the 1494 Exchequer Rolls, King Alexander III of Scotland was taking part in a hunt when a rampant stag charged him. Before the King could be harmed, Colin of Kintail grabbed his spear and struck the animal in the forehead, crying out ‘Cuidich ‘n’ Righ’, Gaelic for ‘Save the King’, as he acted. The beast was quelled and the King, undoubtedly grateful, granted Colin the 12-pointed Royal Stag for his coat of arms. 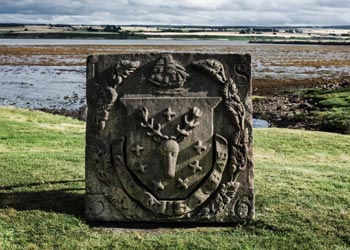 Some six centuries later, a man named Andrew Matheson decided to build a distillery. While many had sprung up around Speyside since the legalisation of distilling, Matheson turned away from the lure of existing infrastructure to build his own distillery on the banks of the Cromarty Firth, open to the elements and the harsh winds from the North Sea. Building everything from the warehouses to the railway tracks, Matheson ensured the distillery would forge its own path and create a unique spirit. 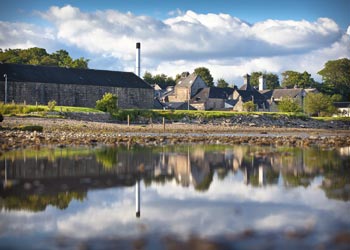 These two stories would finally intersect in 1867 when Andrew and Charles Mackenzie took over Matheson’s distillery. As members of Clan Mackenzie, the brothers were descendants of Colin of Kintail, with their arms bearing his legendary 12-pointed Royal Stag. The Mackenzies brought with them a desire to create an even better whisky than was being produced at the distillery and ensured every bottle would be hallmarked with the iconic stag from their arms as a personal guarantee. 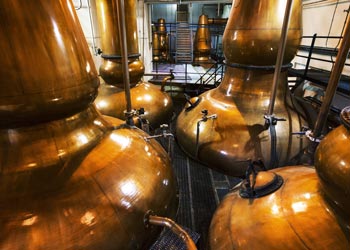 While whisky stills are conventionally uniform in size and shape, The Dalmore’s stills are a variety of different shapes, working in combination to produce a whisky with a strong and complex character. From here, the spirit is filled to American white oak casks sourced from the Ozark mountains Kentucky and aged sherry casks from Gonzalez Byass, one of Spain’s best-known sherry bodegas. 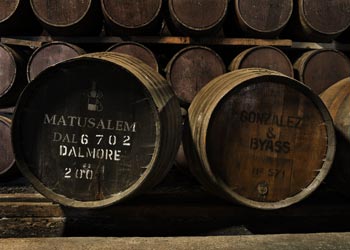 In a relationship that was established more than 100 years ago, the Dalmore is the only distillery permitted to use select aged sherry casks from Gonzalez Byass, imparting a deep copper colour and rich flavours of crushed almonds, cinnamon, ginger and citrus to the spirit. Meanwhile, the American oak casks bring lighter flavours of vanilla, honey and tropical fruits. The combination creates a complex and rich whisky that is often given a final flourish in a third type of cask, such as port wood, Bordeaux red wine barriques, Marsala wine casks or Madeira wood.

The Dalmore’s range of single malts are much-revered by the global whisky community – so much so that it has produced some of the world’s most expensive whiskies including a 62-year-old bottle which set a new world record price when it was auctioned for nearly £26,000 in 2002. This has since been surpassed multiple times, but when just three bottles of The Dalmore Trinitas were released in 2010, all three sold for between £110,000 and £120,000, making it part of the very exclusive six-figure-whisky club.

Despite The Dalmore being famed for expensive headline-grabbing bottles, it is the core range of more affordable single malt whiskies that have cemented the distillery’s reputation, with both the Dalmore 12 year old and 15 year old expressions becoming firm Customer Favourites at The Whisky Shop.