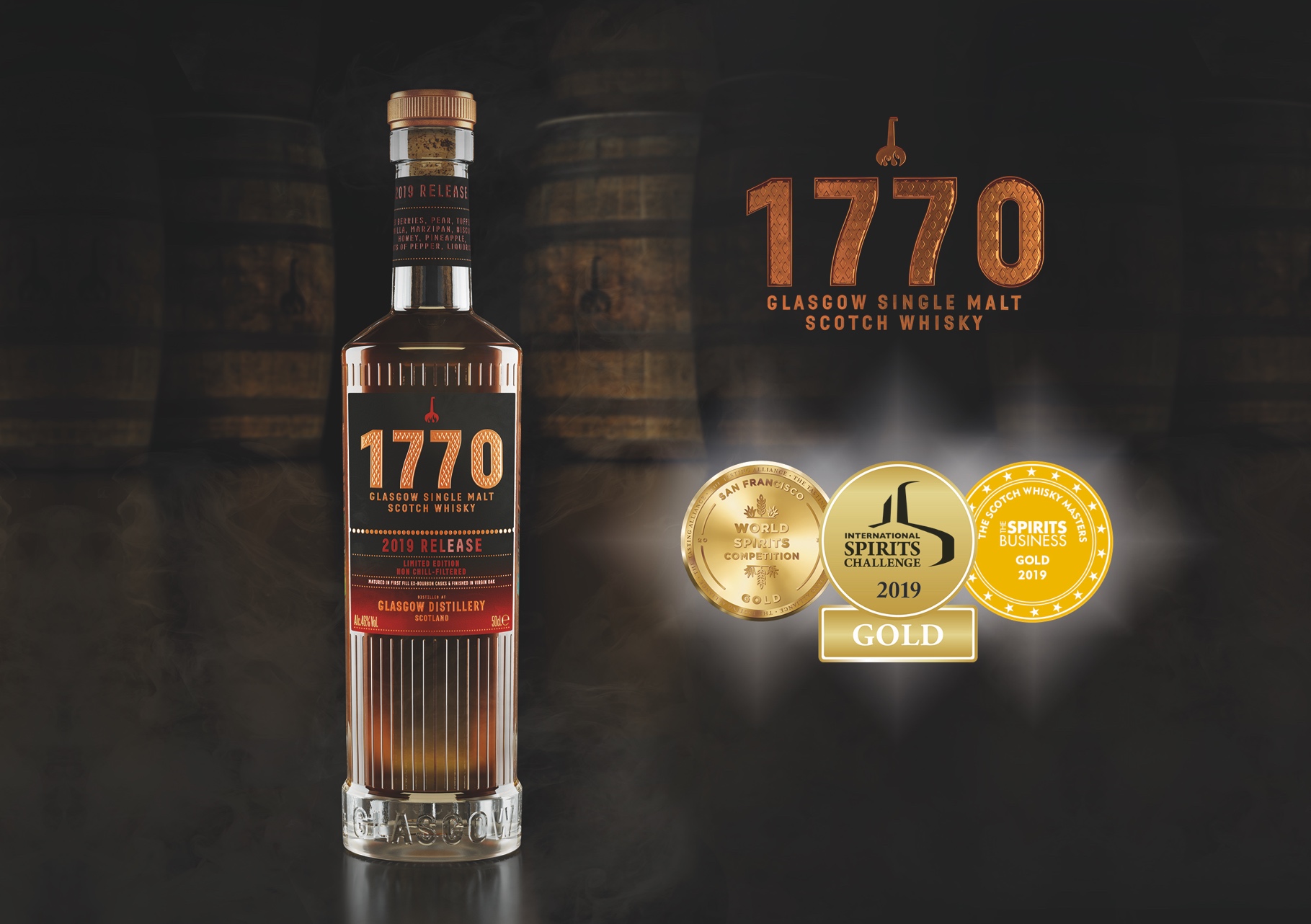 The debut whisky from The Glasgow Distillery – 1770 Glasgow Single Malt Scotch Whisky, has picked up a trio of internationally recognised gold medal awards already in the first half of 2019, sharing gold medal status with some of the world’s greatest spirits.

Having been awarded Gold Medals in three highly respected spirits competitions; The San Francisco World Sprits Competition, The International Spirits Challenge and the Scotch Whisky Masters, 1770 has fought off strong competition both domestically in Scotland as well as on the international stage.

The 1770 Single Malt’s accomplishments have been no mean feat as these three competitions are among the most respected, authoritative and influential spirits competitions in the world, all with the common purpose of recognising the most exceptional spirits from around the globe. Each competition is founded on a rigorous and independent blind tasting judging process judged by some of the world’s most highly respected industry experts.

Liam Hughes, CEO and Co-founder of The Glasgow Distillery, said:

“We are delighted to have picked up a trio of gold medals at these fantastic competitions, especially considering the scrupulous blind assessment from multiple experienced panels of specialist judges. It’s an honour to know that 1770 is holding its own when judged alongside critically acclaimed scotch whisky brands.

"We’re truly passionate about the journey we have been on as a distillery and we’re incredibly proud to be re-establishing the metropolitan Scotch Malt Whisky tradition alongside the great whisky regions and bringing Glasgow Malt Whisky back to life. This is about the rising of Glasgow distilling from the ashes and we’re proud to be leading the way.

“We are absolutely thrilled with the recent results and we are hopeful that it’s also a sign of things to come.”

The Glasgow distillery opened its doors in 2012 and is the first new independent single malt whisky distillery in Glasgow city to do so since 1902. With the knowledge that first impressions last, the distillery has taken the greatest care when crafting this fine malt. Using only the finest Scottish barley and the purest water taken from Loch Katrine to create the spirit before maturing it in a first fill ex-bourbon cask and finishing it in a virgin oak cask to create a wonderfully complex whisky.

The 1770 Glasgow Single Malt is available now from The Whisky Shop.