The World's Most Unusual Whiskies

The whisky industry is highly experimental - distilleries are constantly coming out with exciting releases that play around with cask finishes or the distillation processes. No two whiskies are the same and the limits are continuously being tested by distillers who are always thinking outside the box. The horizons of what is possible in the world of whisky making are constantly expanding.

We have compiled a list of what we believe to be some of the world's most unusual whiskies. Some are genuinely wonderful, innovative drams, and some are just exceptionally strange, but they are all wildly creative expressions that are sure to blow your mind.

Something of a cult whisky, Loch Dhu is known for its peculiarly dark colour and bold flavour profile. Loved by some and hated by others, Loch Dhu is one of the most distinctive whiskies to come out of Scotland. The black colour of this divisive dram comes from the double-charred casks that were used to mature the liquid. Its colouring is referenced in the name "Loch Dhu" as "Dhu" translates in Scots Gaelic to "black."

Released by United Distillers (now known as Diageo) in 1995, Loch Dhu was created at Speyside distillery, Mannochmore. It is no longer in production, which has made it an exceptionally popular whisky at auctions, with bottles regularly going for hundreds of pounds.

Born as a result of a happy accident, Ardbeg Serendipity came to be when incorrect whiskies were mixed together during the distillation process. However, the result of this turned out to be quite amazing. This Frankenstein whisky is a wonderfully sweet and smoky expression that captivated both hearts and taste buds upon its release in 2005.

If you're keen to learn more about this dram, why not try it out and see what you think for yourself? Ardbeg Serendipity is available to shop here at The Whisky Shop! 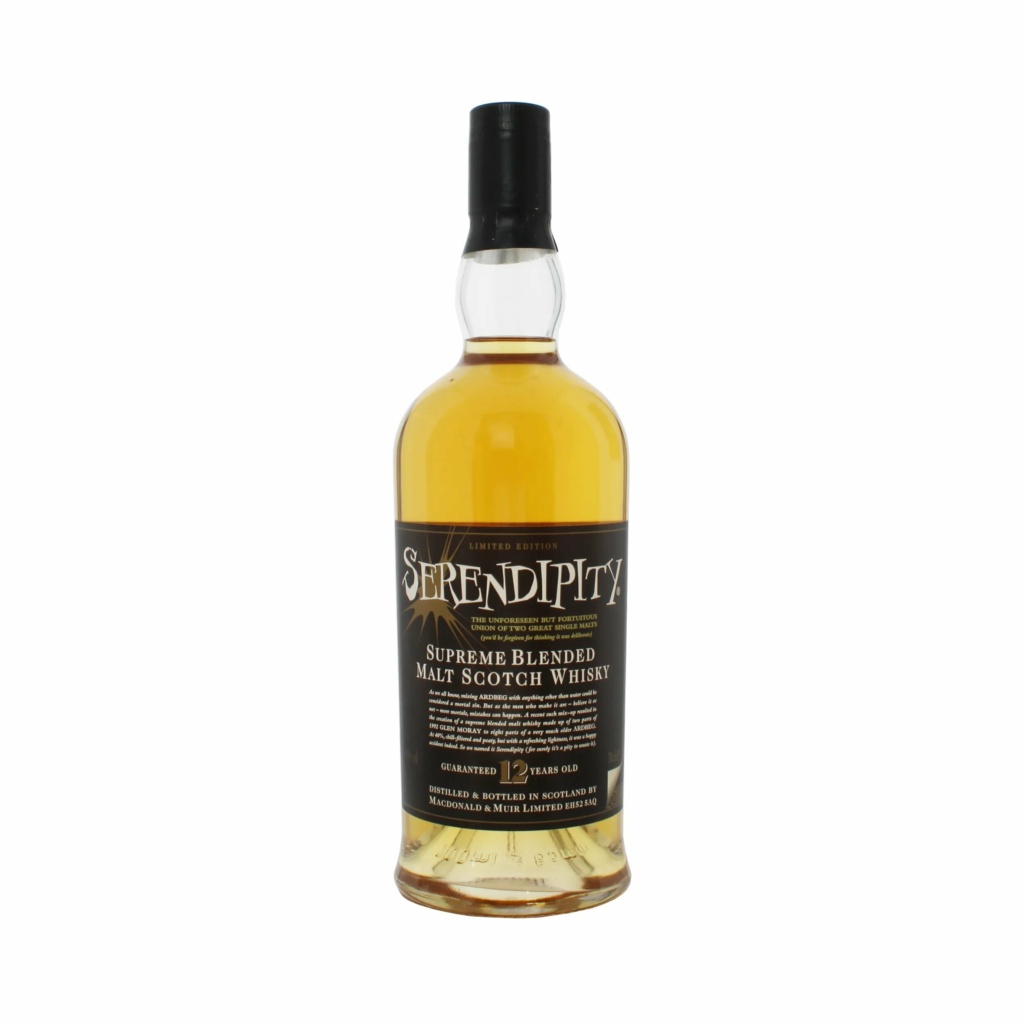 A particularly trendy Californian dram. Indiana corn-based whiskey is initially matured in ex-bourbon casks before finishing in barrels that have been seasoned with cold brew coffee from Oakland café, Bicycle Coffee. The experimental whiskey has been particularly well-received, commended for its sweet and light nature.

Interestingly, the cold brew coffee that is used to season the cask is sent back to Bicycle Coffee and they then sell this oak-aged coffee in their shop. Minimal waste and maximum taste - a resounding success for everyone involved!

Mosswood have a variety of other exciting drams, such as their Apple Brandy Barrel and Pinot Noir Barrel releases. They pride themselves on their innovation, and for good reason!

Hailing from Louisville, Kentucky, Jefferson's decided to play around with the idea of aging whiskey at sea. This unique process of aging whiskey affects the dram in a variety of ways, from the colour it takes on to the flavours that develop.

By the movement of the waves, the bourbon is constantly moving and therefore more of the whisky interacts with the wood of the barrels. The casks are exposed to salty sea air and fluctuating temperatures, which will, of course, have an impact on the bourbon inside.

Each voyage is unique, which means that every addition to this series is a completely singular dram. So far, there have been 25 releases to this unique collection.

Are you thinking that a dram like this comes from somewhere in Scandinavia? Think again! Reindeer antler whisky actually originated in Thailand. Thai rice grain whisky is infused with reindeer antlers during the final few months of maturation. Reindeer antlers are believed to have several health benefits - they are said to have rejuvenating qualities that help to improve vitality.

Reindeer antler whisky falls into the category of Yaa Dong which is a collection of traditional Thai herbal liquors. Much like herbal teas, these drinks are known to help illnesses or ailments and work as a form of alternative medicine. Reindeer antler whisky is extremely affordable and easy to source, so it is definitely worth seeking out if you ever find yourself in Thailand!

A delectable dram for those looking to satisfy a sweet tooth! From the Brooklyn-based Kings County Distillery, this whiskey has been created by combining their house Moonshine with ground cocoa beans that have been sourced from a local chocolatier. This sumptuous expression works perfectly in post-dinner dessert cocktails.

Their chocolate flavoured endeavour isn't the only experimental dram from Kings County Distillery. They also sell a Grapefruit Jalapeno Whiskey, a tart and spicy expression unlike any other. This is a distillery to keep an eye on as they continue to test the boundaries of whisky-making and show no signs of stopping any time soon.

The Octomore 6.3 Islay Barley 2009 from Bruicladdich is the first to be distilled using 100% Islay barley. This is the peatiest dram ever to be released in the whisky industry 259PPM (parts per million). To put this into context, whiskies with 25-30PPM are generally deemed to be particularly smoky drams - the whisky is ten times peatier than the average peated single malt.

Tempted? You can actually buy the unique Octomore 6.3 Islay Barley 2009 here today at The Whisky Shop!

A brainchild of Diageo, this is another fabulous whiskey to try if you're into the sweet stuff. Unlike Kings County Distillery's Chocolate Flavoured Whiskey, this dram does not draw its pecan pie flavour from natural ingredients. Rather, it is simply Canadian whisky with flavour additives to create the super-sweet expression. Converting the flavours of a freshly baked pie into a whisky sounds unachievable, but Piehole somehow manage it! Rich and buttery, this is a perfect whisky to add to a cocktail in place of a dessert after dinner.

If pecan pie isn't your thing, this whisky is also available in apple and cherry pie flavours. A real treat!

Released as part of Diageo's Whiskey Union project, Boxing Hares is the middle release of the trilogy. Technically a spirit drink as opposed to a whisky by UK law, Boxing Hares is chill filtered and bottled at 35% abv.

This release combines Scotch whisky with Hallertau and Cascade hops that are most often found in craft beer. Mixing whisky and beer sounds like a wild idea, but Boxing Hares pulls it off pretty well. The product has received mixed reviews, but it is more well received than not. A sweet and slightly bitter dram, you can drink Boxing Hares neat or topped up with a mixer of your choice. 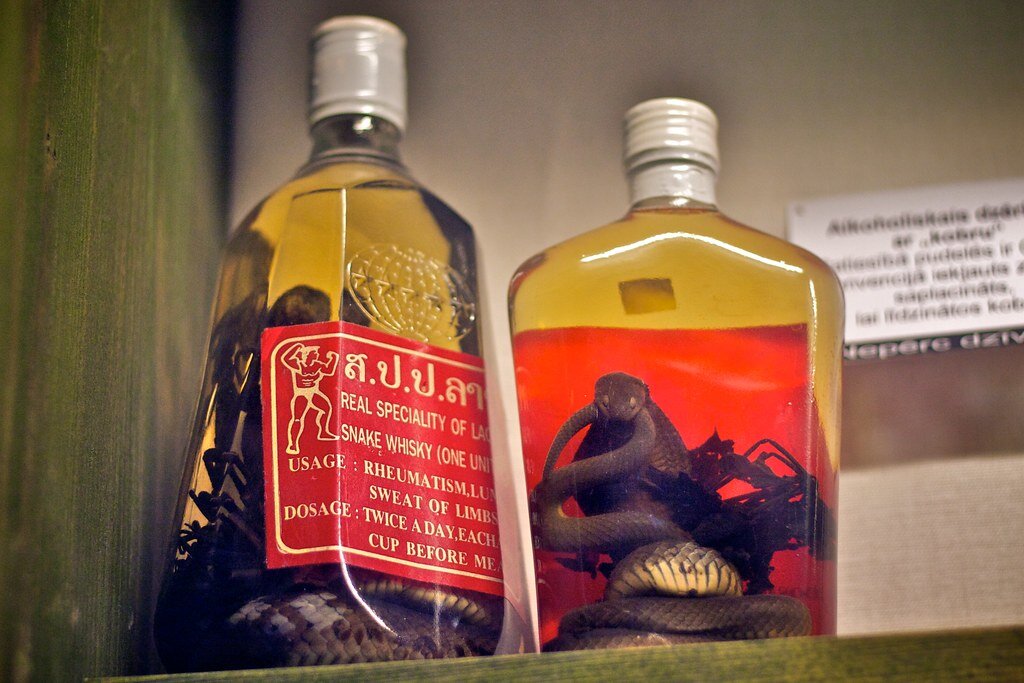 A dram for only the brave. Another unique dram that is readily available in Thailand, snake whisky is exactly what it is advertised as. A dead snake, usually a cobra, is added to whisky and is left to mature. The snake's venom is neutralised by the alcohol, so it is totally safe to drink.

The origin of snake whisky can be traced back to traditional Chinese medicine. The concoction was believed to be able to cure almost any physical ailment.

The bottles in which the snake is poised as though it is about to strike are particularly special - it is believed that the snake was fierce in spirit and by drinking it, you will become fiercer, too.

If you're looking to go a step further than snake whisky, you can also find scorpion whisky and tarantula whisky. It sends shivers down our spine - but to each their own!

Do you have an affinity for spice? If so, Rogue's Chipotle Whiskey would probably impress you. The whiskey's entire production takes place in Oregon, from the growing of jalaoeno peppers to the maturation of the dram.

The jalapenos from Rogue's farms are dried and smoked over cherry and alder wood for over 24 hours to transform them into chipotle peppers. These chipotles are then added to the wash. More are added after the distillation process, too. Then, the dram is left to mature, allowing the wood, whiskey, and peppers to mix together to create a sweet, smoky, and spicy treat.

This whiskey is pretty divisive, but you have to commend Rogue for their creative spirit!

Where to start? Undoubtedly the strangest dram on the list, we present you with Fishky. Created by German independent bottler, Stupid Cask, a single cask of sherry finished Bruichladdich underwent an additional finishing in a cask that had originally stored herrings. Sounds delicious, right?

The inspiration for Fishky allegedly came from the use of herring casks in Scottish whisky history. It is believed that sailors may have stored their whiskies in fishing barrels. It is also rumoured that herring casks may have been used hundreds of years ago to occasionally mature whiskies. We can't imagine why they would have stopped doing this.

The result, unsurprisingly, is a universally panned whisky. The taste is overwhelmingly - you guessed it - fishy. Nowadays, it is almost impossible to source a bottle of Fishky and honestly? It's for the best.

So, there you have it! Some of the most weird and wonderful whiskies that the world has to offer! While they may not all have been amazingly received, they all score ten out of ten for creativity.